The label is broadening its offerings with a new denim-based collection called Two by Vince Camuto. 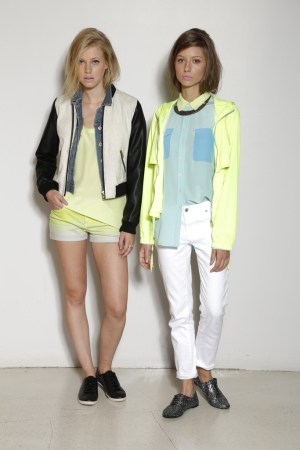 Vince Camuto is broadening its offerings with a new denim-based collection called Two by Vince Camuto.

This story first appeared in the October 2, 2012 issue of WWD. Subscribe Today.

“It’s a little younger, more weekend wear and geared to the woman 25 to 40 years old,” said Vince Camuto, chief executive officer and chief creative officer of the Camuto Group. After a soft launch this fall and strong sell-throughs, the collection has been expanded to incorporate more styles and colors.

In July, Camuto Consulting Inc. acquired the shares of Bernard Chaus Inc. not owned by members of the Chaus family, and Chaus became a private company.

Two by Vince Camuto will be housed in separate departments from the Vince Camuto collection, which is aimed at a slightly older customer and has more wear-to-work looks. The casual collection is being rolled out to stores such as Nordstrom, Dillard’s, Lord & Taylor and Bloomingdale’s. Two by Vince Camuto will have shops-in-shop, special store fixturing and a separate ad campaign. “That customer is very much online and uses a lot of digital,” said Leah Roberts, senior vice president of licensing and advertising at the Camuto Group.

According to sources, Two by Vince Camuto could drum up wholesale sales of $50 million after the first year.

“It’s a huge opportunity for us,” said Chaus. “It could even grow to be larger than Collection.”