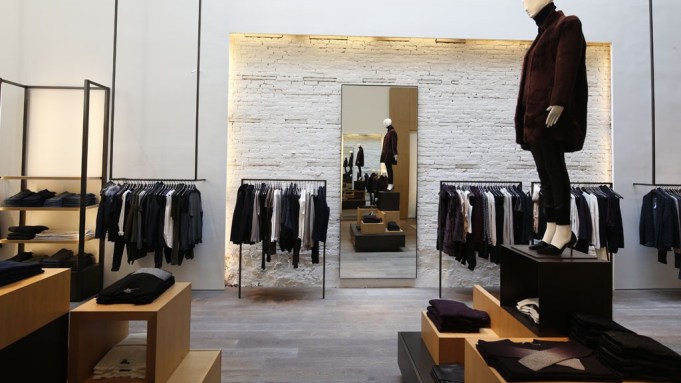 NEW YORK — With its impending initial public offering, Vince is in a quiet period. But executives aren’t shy about discussing their stepped-up retail program.

The fashion firm today will open a sun-drenched, 3,050-square-foot flagship in SoHo here with soaring 22-foot-high ceilings and ample space to display the entire collection. The flagship, along with other retail plans, will no doubt be called out in the road show to underscore the brand’s accelerating brick-and-mortar strategy and evolving collection. While Vince’s owner, Kellwood Co., has not revealed a timetable for the IPO, it could happen as early as this year.

Vince — known for modern, contemporary, easy, drapy styles, and what executives refer to as “everyday luxury essentials” — continues to add categories. In the past year, it has also been elevating its fashion. There’s colorblocking, “mixed media” styles such as sweaters with cashmere sleeves and silk bodies, and some edgier, higher-priced items — like $1,000 leather jackets and $2,400 fur jackets — to augment core offerings such as sweaters, priced $295 to $495, and T-shirts and tanks at $48 to $135, as well as legging and ponte pants. The flagship is designed to reflect the more sophisticated and innovative design direction under Doo-Ri Chung, who has been the creative director since January.

“We have predominantly been a U.S. wholesale-driven women’s apparel business. Our goal is to evolve into a global multichannel dual-gender lifestyle brand,” said Jill Granoff, chief executive officer of Kellwood and its $500 million Vince brand. “Expansion of retail is a key element of the strategy.”

“Retail is a very targeted strategy, focused on major metropolitan markets in areas where there are both luxury and advanced contemporary brands,” added Beth Cohn, senior vice president of Vince retail and e-commerce. High streets, “A plus malls” and lifestyle centers are being scouted, including Newbury Street in Boston, Bal Harbour in Miami, and Las Vegas, Cohn said. Locations from 2,500 to 3,000 square feet are ideal. “We are focused primarily on full-price locations as well as on a few strategic outlet locations,” said Cohn.

By the end of this year, Vince will have 22 full-line stores and six outlets. That’s eight more than in 2012. “There will be similar levels of store growth in the future,” Granoff said, declining to get more specific on the projections due to the IPO.

RELATED STORY: Kellwood to Spin Off Vince Brand With IPO >>

Retailing accounts for about $80 million, or 16 percent, of the total volume of Vince, though retail revenues are expected to represent a bigger percentage of total revenues as stores get rolled out. Wholesale accounts include Saks Fifth Avenue, Neiman Marcus, Nordstrom, Barneys New York, Bergdorf Goodman, Harrods, Lane Crawford and Harvey Nichols. Vince is also overhauling its Web site, which will relaunch in the spring.

The next full-line opening, on Columbus Avenue between 71st and 72nd Streets in Manhattan, will occur sometime in the fourth quarter. Full-line stores in Greenwich and Westport, Conn., opened earlier this year, and stores are being remodeled to reflect the look of the SoHo site.

Founded in 2002 by Rea Laccone and Christopher LaPolice, the Los Angeles-based Vince was sold to Kellwood in 2006, when it also started opening stores. When the founders left the company in February, Granoff assumed the additional responsibility of ceo of Vince, overseeing strategic growth and direction. Though flagship is an overused term, Vince executives explained that their SoHo store qualifies as such because it’s the brand’s largest location containing the most comprehensive assortment exhibiting the scope of the brand. It’s also the first Vince unit with two floors, the second level being a 550-square-foot mezzanine housing the men’s wear — patterned button-up shirts, hand-knit sweaters, brushed wool trousers, and classic Ts and denim — adding up to what’s described as a growing commitment to the category. On the mezzanine, there are fitting rooms and a cash wrap just for men, while women have their own on the 2,500-square-foot main floor.

Officials point to opportunities to add suit separates and new denim fits for men, and on the women’s side, increase footwear and dresses down the road. For holiday, scarves and accessories are being bolstered. The idea is to be eventually recognized as a true head-to-toe outfitter.

On the women’s floor, shearling and pony outerwear, leather and suede leggings, cashmere sweaters and silk tops, as well as boots, pumps and casual footwear are featured. The color palette is largely neutral and the appeal is broad, from 20 to 50 year olds shopping designer, aspirational and advanced contemporary labels.

“What we love is the height of this ceiling,” Granoff said Wednesday on a tour of the SoHo site. It adds drama and a sense of spaciousness. Granoff also pointed to the large skylight shaped like a half moon, the soft ambient lighting, exposed brick walls, the antique bronze hang rails, the lit étagères for footwear and accessories, taupe leather ottomans, and the cube fixtures that double as pedestals for mannequins or display cases for folded merchandise. There is also African mahogany paneling, a reclaimed oak floor and an architectural staircase to the men’s mezzanine. The design was introduced at the Madison Avenue store a year ago and the Prince Street store and the unit in Dallas’ Highland Park were also remodeled to the look.

Granoff suggested that when stores adapt a contemporary decor, they can sometimes feel cold in character. But that’s not the case at Vince. “It’s a modern and clean design and at the same time it’s warm and comfortable,” she said. “In the past, our stores tended to be smaller, darker and have a more industrial feel.”

Maybe even more important is that the flagship exhibits the entire collection in an easy-to-shop, uncluttered space, whereas Vince merchandise inside department stores can be scattered, with the men’s separated from women’s, for example. The Columbus Avenue store will also have a good representation of women’s and men’s with a design that has two floors as well.

“So many people don’t know that Vince has men’s,” Granoff noted. “The ability to shop across different categories is critical.”