Brand will reveal today that it has signed a three-year licensing deal with Churchill Downs Racetrack. 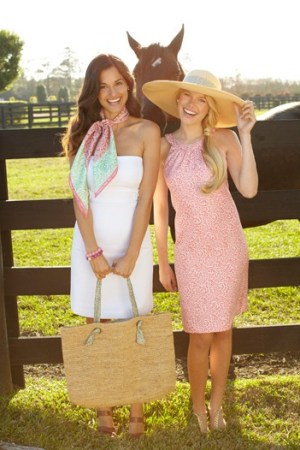 Vineyard Vines is branching out beyond its nautical roots.

This story first appeared in the March 15, 2011 issue of WWD. Subscribe Today.

The Connecticut-based brand will reveal today that it has signed a three-year licensing deal with Churchill Downs Racetrack to create an official fashion collection for its storied Kentucky Derby race. As “Official Style of the Kentucky Derby,” Vineyard Vines will create a custom-designed line of apparel and accessories for men and women that will debut in April. It will include sport coats, shirts, ties and belts for men; dresses, tops, scarves, hats and handbags for women, and sportswear for both genders. The collection will be sold at the 13 Vineyard Vines freestanding stores, select department and specialty stores nationwide, as well as through the official Kentucky Derby online store and online.

“We are excited to partner with Vineyard Vines on our first officially licensed collection of fashion apparel and accessories for the Kentucky Derby,” said Casey Cook, vice president of brand development and marketing for Churchill Downs. “The collection is fresh, stylish and conveys the sense of fun and excitement that people around the world associate with the Kentucky Derby lifestyle.”

In addition, Vineyard Vines will sponsor the Derby tractors, which clean the track between races. They will be branded with the company’s logos.

Last year, Churchill Downs, which owns the Derby and its sister race, the Kentucky Oaks, said it was seeking partners for a high-end apparel license and other products. A men’s neckwear collection created by Charles & Patrick has been replaced by the Vineyard Vines product, according to Cook.

In other Vineyard Vines news, the brand has signed leases for two additional stores, in Southpark in Charlotte, N.C., and Newport Beach, Calif. This marks the company’s first foray onto the West Coast. The California store will measure 3,817 square feet and will be located at Fashion Island. It is slated to open in August. The 3,817-square-foot North Carolina unit will be at Southpark mall and will open in June.

And this summer, Vineyard Vines will debut its first women’s swimwear collection. Price points will range from $55 to $65. The swimwear will be sold at Vineyard Vines stores, online and in select wholesale accounts.