Williams spoke animatedly about her love of fashion, why she wanted to bring her line to HSN, and what she hopes to achieve with her collection. 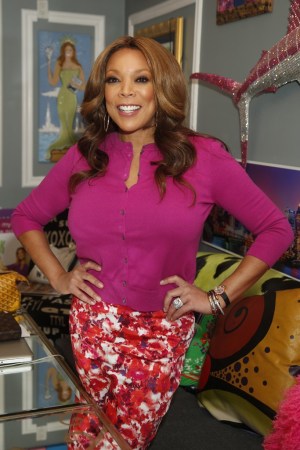 Interviewed at her New York studio Monday after a live taping of her show, Williams, 50, spoke animatedly about her love of fashion, why she wanted to bring her line to HSN, and what she hopes to achieve with her collection.

“First of all, I shop HSN. It’s a no-brainer that they bring convenience into households everywhere. Sometimes we get selfish when we live on a coast, we can just run and get fabulousness right around the corner. But when women are living in more remote areas of this country, they don’t have the benefit of jumping in the car and doing world-class shopping,” Williams said.

As host of “The Wendy Williams Show” on Fox for the past six seasons, it became clear to her that “clothing has become a costar of this show.” Her syndicated daytime show, which is heavy on gossip and celebrity conversation, is geared to the key 25-to-54 female demographic. Some weeks the show has scored No. 1 in the daytime ratings, beating out such programs as “Ellen” “Michael and Kelly” and “Dr. Phil.”

Williams said she frequently hears from college students, at-home moms and working women that they enjoy the “Hot Topics” she discusses on her show, but they love to see what she’s wearing and commenting about it on social media. She said it doesn’t mean they agree with everything she puts on, but they like to see the variety. “I’m a woman of a particular age, and I find it very flattering that a 22-year-old girl can turn on the show and find something great to wear because her career is just starting. It also makes me flattered to know that a woman, who’s already an established attorney and may be 55 years old, is looking for a way to keep herself in the workforce because these young kids come along and out-do us. Spice it up — just because you’re 50 doesn’t mean you have to wear everything at the knees or below. I’ve been known to wear very short stuff,” said Williams, who’s 5-foot, 11 inches tall and leans toward body-hugging clothes.

So who does she envision as the Wendy Williams customer?

“She is a diva on a budget, even if she doesn’t have a budget. She’s got a great sense of style, she know when she smells a bargain. She’s a college student, she’s a single mom who’s 33, or she’s a go-getter in the workforce at 33, and she’s also 70,” Williams said.

The line, which is being manufactured by KBL Group International, will range in size from XS to 3X.

The Wendy Williams line will be sold exclusively at HSN. For the first time on the air, they will present between six and 12 different styles. “We expect Wendy Williams to be one of our top brands over time,” said Martin-Vachon. She said the exact calendar hasn’t been set yet, but Williams will present several collections on-air throughout the year.

Williams and HSN plan to start with apparel. “We’ll build a strong foundation and can go into other categories,” Martin-Vachon said.

As for her own personal style, Williams said she loves to wear dresses, and particularly loves dresses by Diane von Furstenberg and Norma Kamali, and she’ll have dresses made by Angela Dean. “Dresses to me are so easy. You put it on, after it’s properly altered. You always have to have the right shoes. I also love skirts and sweaters.”

With her busty figure, Williams said she’s constantly having to alter her clothes. “I’m constantly at war with my breasts, and [breast] reduction is out. I’m a size 4 and 6 on the bottom, but a size 16 with alterations on the top. They alter everything. I have $30 dresses and $20 dresses, but there are also some things that cost me thousands of bucks, and also the shoes, forget about them, they’re a lot. What I always tell women, ‘spend $40 on a dress that you like and then invest another $40 to get it altered to your body. Best $40 you’ll ever spend.’”

As for requirements for the line, she said, number one was stretch. “It’s very important we have spandex in everything. I’m known for that odd snap, right here at the gaping. My blouses aren’t made especially for larger-chested girls, that snap is going to count, and ease and affordability,” she said.

The week leading up to her March 28 show on HSN, Williams plans to wear the line every day on her show. She’ll also do a fashion show on the program on March 18 that will be repeated March 27. She will then appear on HSN twice on March 28.

“It doesn’t guarantee a hit unless the person really believes in it and talks passionately about it. I’m very happy, I’ve seen a lot [of the line], and there are a lot of silhouettes that I wear every day. I feel as though fashion should be more affordable,” she said. A handbag, that’s a whole other story.