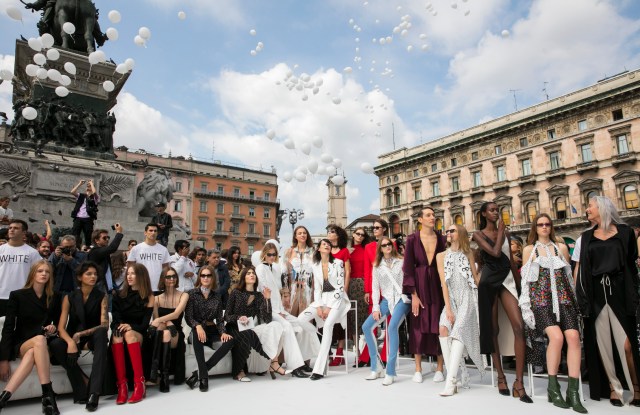 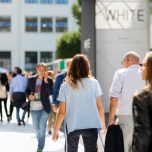 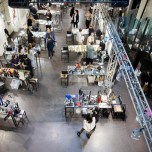 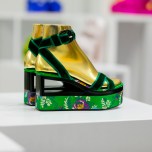 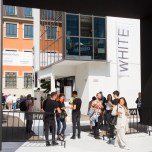 MILAN — One of Milan’s biggest commercial events during fashion week takes place on Via Tortona at White Milano, a showcase that unites hundreds of women’s wear brands in one district during the frenzy of the ready-to-wear shows. And despite the closing of retail chains worldwide and the shuttering of concept stores like Colette, the fair grew 20 percent in terms of visitors and 31 percent in terms of buyers year-over-year.

“The world is in a phase of political and economic tension and I can’t help but hope our sector will prove resilient despite this tension,” said White organizer Massimiliano Bizzi, noting that political tensions between the U.S. and North Korea, as well as the strong euro, are currently weighing on the minds of many Italian exhibitors. “The euro will definitely impact exports,” Bizzi noted.

White organizers showed off their growing presence with the Ssheena runway show, which was staged at Palazzo Reale’s Sala delle Cariatidi and which later moved to the middle of Milan’s Piazza Duomo — with white balloons for the public and rows of hosts wearing White T-shirts. Sabrina Mandelli, the founder and designer of Ssheena, was invited to headline as White’s special guest this season.

Mandelli, a 31-year-old from Brianza, has also worked at Dolce & Gabbana, and most recently, as a head women’s wear designer for Virgil Abloh’s Off-White line. Mandelli said her spring collection is a tribute to the life of a female revolutionary.

“I opted for a Thirties-era lesbian European club vibe, in part due to the current global situation. During the Thirties, these women were a rebellious crew and lived on the brink of a world crisis but they weren’t scared to express themselves. And that is really what I wanted to do as a young designer…is depict a person with no fear,” Mandelli said, noting that she sells mostly in Italian boutiques. She hopes White will give her the international push she needs to succeed.

In terms of trends, exhibitors on the floor unfurled an array of collections and themes, ranging from wanderlust Riviera chic to urban streetwear.  Brands such as hand-made accessories maker Sikuly Art & Tradition and rtw brand Pourquoi Me by Elena Montagano showcased summer fashions that are indicative of the easy wear worn in hot vacation spots like Capri, the Sicilian islands and Tuscany’s Maremma.

The collection’s target was a modern, cultivated woman, who is constantly on the go — which perhaps also describes the target woman many of White Milano’s brands aim to dress.

“Casadei has chosen these models, in which precious materials mingle with high-tech details, for a modern-day woman and an inquiring, dynamic and classy globe-trotter,” the brand said in a statement.

Buyers at the show noted that Asia’s online sales are rapidly growing. Chinese and South Korean customers, they said, are becoming more and more knowledgeable about trends and designers, yet still, they are always on the lookout for bargains and reasonable prices.

“I think the Chinese customer is looking for good quality for sure. They’re looking for something new. Younger customers, especially, want better quality and good patterns and easy-to-wear ensembles,” said Kelly Wang, owner of the China-based concept store Anni. Wang said her store’s sales rose 30 percent in the first half of the year versus the first half of 2016.

Looking ahead, Wang explained that sales are likely to rise, since the multibrand channel in China is limited. “There are not so many choices, which is why we are doing our best to communicate and network worldwide. It’s definitely growing,” Wang added.

Due to his passion for photography, the younger Marras opted for a fresh line hall-marked by simple shirting materials, emblazoned with photos of his summers in a small seaside village in Sardinia — a place where his mother also spent summers as a child. “My dad does a lot of poetry. I am not about to compete with that. I am doing my own thing,” Marras said, noting that White is the most “international” place for him to meet buyers from all over the world.

Expanding the fair’s international selection is seen as key for its future. Kazakh designers were invited to show at the Nhow Hotel at Via Tortona 35, while South Korean brands showcased a selection of their most established designers in White’s Four Rooms selection on Via Tortona 27.  Studio G., F. Cocoromiz, Jegal Hun, Murray Allan and Tovoroni were among the top South Korean brands tapped to show at White.

“In the end, we just want to serve as a fair where you can find innovative and international brands. We also want to be known as a showcase for beautiful labels that are purveyors of high-quality goods,” Bizzi said.