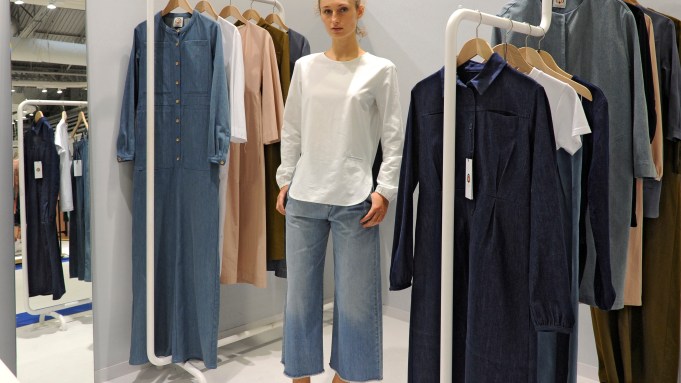 PARIS — “Encouraging” is how Etienne Cochet described the results of the first session of Who’s Next under his tenure as general manager of WSN Developpement, the trade show’s organizer, since joining in May.

“Considering the economic and political context we’re faced with in Europe and in France, we really weren’t sure what to expect, but the mood is upbeat,” the industry veteran said at the show’s closing on Monday. “We pulled out all the stops down to the fair’s architectural details, using punchy colors to help lift the mood and incite desire — and most importantly sales. And the sales came through.”

Out to up the fashion quotient, Cochet at a press conference earlier the same day revealed that the upcoming editions of accessories salon Première Classe Tuileries and apparel showcase Paris Sur Mode Tuileries, slated to run Sept. 29 to Oct. 2, will host the fashion and accessories collections of the laureates from this year’s ANDAM and the Hyères International Festival of Fashion and Photography.

As reported, both shows will integrate the Capsule Paris Women’s trade show and its lifestyle and fashion labels. Première Classe Tuileries will expand to fill three tents, allowing for a bigger range of brands including a larger focus on men’s accessories. Paris Sur Mode Tuileries is to move to a new tent near the park’s Place de la Concorde entrance.

This was the swan song show for Boris Provost, director of brand strategy and international development at Who’s Next, who has been tapped by competitor Reed Expositions France to head up the group’s B2B show EquipHotel. His successor has not yet been confirmed.

Traffic at the sprawling four-day Who’s Next event, held at Paris’ Porte de Versailles, was still down, particularly among local buyers. Attendance figures, combined with those of Première Classe, fell 7 percent to 38,258 visitors versus last year’s session, organizers said. The number of French visitors declined 8.2 percent, with the number of those from abroad dipping 5.4 percent. The Americans were back with a 13.3 percent rise in attendance. There was also a strong turnout from Scandinavia and the Middle East.

Operating in a strained economic and political climate, and amid increasingly fierce competition on and off-line forcing them to up their game, buyers were on the hunt for brands with that extra je ne sais quoi.

“I will edit, edit, edit until I have the very best, can’t-live-without pieces on order,” said Karen Quinones, owner of En Avance, an upscale multibrand store based in Miami’s design district. Among market challenges she cited an oversaturation of certain brands, “hence the reason why I walk as many shows as possible — so I can present my client with something unique, exclusive and of the moment without having to see the pieces on every single major web site and store.”

“The main challenges are to keep on innovating and keep figures on a positive curve in these difficult times, which is not easy,” echoed Cherif R. Tabet, co-owner of Beirut-based Tabet Group, which operates 20 stores. His budget was slashed by 30 percent.

“The whole French market is very challenging right now. Everyone’s complaining about the impact of the bad weather on sales this summer and how customers are only buying during the sales periods,” said Régis Pennel, founder of L’Exception, one of France’s fastest growing e-commerce players, which specializes in French brands.

Pennel found the show to be more dynamic compared to last fall’s session, with the outside space also used to showcase young designers and a series of compelling conferences, but said the collections offered few surprises. “The bohemian thing is still going strong, with all the long dresses and embroideries, which customers love for summer, but there wasn’t much newness coming through,” he said, citing among his favorite collections G.Kero, which counts Kate Moss, Cara Delevingne and Elle Fanning among its fans. “I just love what they’re doing with prints.”

Tony Yau, director of the Hong Kong Eva group that operates around 20 multibrand stores in Hong Kong, picked out MiniMe for its “happy, playful designs that will do well with the younger generation.”

For Tabet Group’s Tabet, the Scandinavian brands stood out from the rest in terms of style, quality and price. “Samsoe is a great brand with a lot of potential, for example,” he said.

Noteworthy newcomers looking to develop export included Antwerp’s Walldog, which collects authentic signs from streets and shops from around the world sent in by photographers and journalists that are then screen-printed on to T-shirts and sweaters. An accompanying web video tells the story of each sign with its GPS coordinates stamped on postcards supplied with the garments. “It’s about storytelling, preservation, authenticity, small shops,” said cofounder Karl Oorts, adding that the aim is to donate 15 percent of profits to a cause based in the area that each sign comes from. The label takes its moniker from the nickname used for the artists who painted signs and advertising murals in the U.S. in the early 1900s.

Resurrected French nautical knitwear brand Royal Mer presented three fashion lines including a high-end capsule featuring more sophisticated techniques like Trinity stitches. They were among a sea of cute Made in France labels showing at the fair, along with the likes of 9 Juliet, which offered tricolor urban bikinis designed to be worn under everyday clothes, and Elise Chalmin an illustrator-turned-designer, who showed wrap dresses and kimono tops in graphic prints. Alma da Onda, a Brazil-inspired swimwear brand geared to watersports, specializing in designs combining glamour and function, launched a line of beach bags. The brand dresses former speed kitesurfing world champion Charlotte Consorti.

Chagnaud’s purist designs are made in a factory that produces for Hermès and Louis Vuitton, using Greenpeace-approved organic cotton that is woven and dyed in France. “These are seasonless pieces that are designed to age well. They won’t discolor,” said the designer, who presented kimono dresses, jumpsuits and shirtdresses in super-soft washed denim alongside a more fashion-forward capsule splashed with bold illustrations of a girl licking an ice cream by local artist Pénélope Strintz.

Lab Dip, another one to watch, had adapted its collection following feedback from retailers that textured fabrics are moving better than prints. Highlights included a revisited carrot pant in a textured cotton jacquard.

Among new additions to Who’s Next’s services, meanwhile, was Retail Expert Club Solutions focused on technological solutions geared to enhancing retail performance for bricks-and-mortar stores. The new pole was opened by Retail Expert Club, the complimentary consulting service created by Who’s Next and Première Classe in 2012.

Cameleon, a French marketing agency specializing in connected commerce and the digitalization of stores, presented a range of technological innovations. They included Connected Mirror, an interactive mirror, and AppEbox, a camera that provides audience profiling and tracks the emotional response of customers when they look at a product or display.