Both groups were sensitive to prices amid tight inventories and rising costs. 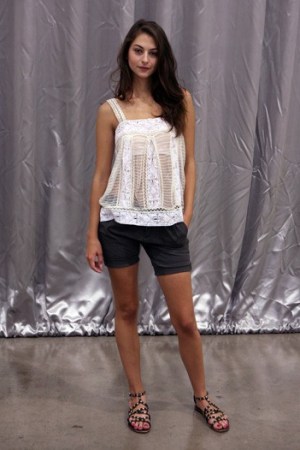 LAS VEGAS — Lessons learned during the bleakest period of the recession are steering the decisions of vendors and retailers.

This story first appeared in the August 25, 2010 issue of WWD. Subscribe Today.

The start of recovery was under way for some of the exhibitors and merchants who attended WWDMAGIC, Project, ENK Vegas, Pool Tradeshow, Workroom, Capsule and the ancillary trade shows here from Aug. 16 to 19, but for others it was still a hope.

As inventory controls stay tight and margins are pressured, an overriding concern of both merchants and manufacturers is minimizing the impact of price increases resulting from rising costs for materials, labor and energy.

Although there appeared to be a greater willingness to consider new resources, retailers were disciplined about ordering and sensitive to pricing, and primarily sought tested, reliable brands.

“People are not really buying and shopping as much,” said Teri Copley, a buyer for the Newhall, Calif., boutique Bailey Blu. Copley was “buying less than last year…instead of having all this inventory you keep and have to put on sale.”

Despite worries about consumer morale, she was optimistic her company would fare better this year than last — a widely shared sentiment. Felicia Wilson, owner of Kinyae Femme Boutique in Chicago, said, “Last year, it was real [slow]. This year, it is picking up.” Lisa Meadows, owner of Kate Lyn’s Boutique, which opened in April in Winter Garden, Fla., said, “Our first-quarter sales have been excellent, so we are real happy.”

But the appetites of buyers have been determined by costs.

“Most stores are looking for the best quality at the cheapest price,” said Caitlin Donoghue, a sales manager for young contemporary line Scrapbook Originals, which did well with $42 military-style fleece hoodies trimmed with lace hems.

Responding to higher cotton prices, which have surged by as much as 40 percent in the past year, Makers of True Originals, a young contemporary denim line from Montreal showing at WWDMAGIC, increased the prices of its jeans retailing for between $60 and $75 by $2, but it also absorbed as much as $1.50 in costs, said Francesco Cuffaro, the company’s North American sales manager.

Erik Hart, the designer of Factory by Erik Hart, which exhibited at Workroom, also chose to take a smaller profit margin. “To keep costs down, I take a lower margin and sell deeper to our stores,” he said. “For me, it’s been very positive.”

Ira Spiegel, sales director for New York-based juniors brand Dollhouse, said brands could absorb losses from elevated costs only for a limited time before there’s an impact on retail prices. “There is going to have to be an uptick at retail, probably within the next year or so,” he said.

Until then, and as the price of cotton has risen, designers have recognized that other supple fabrics such as silk, rayon and Cupro aren’t out of reach pricewise.

“[Silk’s] more expensive than cotton, but not wildly so,” said Gloria Brandes, chief executive officer of young contemporary label BB Dakota in Costa Mesa, Calif., adding that the duty on silk imports is low. Among BB Dakota’s silk offerings at WWDMAGIC were silk charmeuse carrot-top pants. “Instead of taking something stiff and constructed, we’re taking these classic styles in flowing fabric,” Brandes said.

Shin, a New York-based exhibitor at Capsule, mixed sand-washed silk with jersey, its signature material, in a vest for $170. “The look and feel is different from our jersey pieces,” said Stefen Ramirez, a business partner of Shin creative design director Shin Yoon. “Prices are a little bit more, but it is more refined.”

Relaxed silhouettes were plentiful at WWDMAGIC, regardless of materials. Casual brand XCVI cut $59 cargo pants out of Tencel. Urban Behavior washed cotton thoroughly to resemble whisper-thin denim, which it made into capris wholesaling for $22.

Capsule brands went for slouchy fits as well. Swedish label Rodebjer showed an exaggerated knitted vest for $165, an oversize poncho for $200 and a roomy full-length dress for $218. At Newport Beach, Calif.-based Trovata, comfortable pieces to take a woman from the beach to the bar included a floral print drop-waist tank dress for $84, a silk jumper for $168 and silk twill pants for $96. “The whole idea is going back to why I started Trovata in the first place. It’s about surfing and travel,” said Trovata founder and ceo John Whitledge.

For spring, designers opted for a palette washed in neutral hues, such as taupe, gray, navy and olive green, with pops of coral, peach and varying shades of blue. The neutral palette played into the military motif that continued to prevail, but feminine touches such as lace, crochet and floral prints also were prevalent. In fact, combining military and feminine trends was a popular option. At WWDMAGIC, surf and skate brand Hurley paired a $36.50 lace and mesh tank top with $23.50 cotton cargo shorts, for instance. New York-based JouJou presented jackets from $24 to $26 with military accents and ruffles in a soft color palette, with jade, rose and tobacco brown among the popular choices.

No matter the fashion options, some retailers were daunted by the distance between the Las Vegas Convention Center, where WWDMAGIC was held, and the Mandalay Bay Convention Center, where Project, Pool Tradeshow, Workroom and Indigo Gallery were located. Indigo Gallery, nestled within the Premium section at MAGIC Menswear, was a new area dedicated to men’s and women’s jeans makers that had wider distribution and lower price points than the premium denim labels highlighted at Project.

Silver Jeans, which exhibited at Indigo Gallery, said a lot of its women’s retailers didn’t make the trek to Mandalay Bay from the convention center.

“If you’re a women’s-only buyer, it’s tough to come over and see a few select brands,” said Michele Bedrick, director of marketing at Silver, based in Winnipeg, Canada.

The retailers that did check out Silver’s wares liked its $36 cropped cargo pants with a gray putty finish. Also participating at Indigo Gallery was Lucky Brand, which accented $36.55 olive green cargo pants with Native American-inspired embroidery running down the front.

At Workroom, which hosted its sophomore edition with 41 brands at the Mandalay Bay Convention Center, forward fashion with accessible prices was the key to success. Satine and E Street Denim were some of the influential specialty stores that shopped the show, which shared an entrance with Project. South Korea’s Kai-Aakmann tapped the trend for light neutral hues with a $32 taupe dress that draped in a Modal-algodon blend. Kaylee Tankus, also from South Korea, blended a loose fit with handcrafted details in a $97 sand-colored slub jersey tank, whose exaggerated sleeves were trimmed with braids, mesh and linen piping. Venice, Calif.-based Kanvis kept wholesale prices under $100 for its clean sportswear pieces, including $48 rayon jackets with dolman sleeves and $64 strapless cotton jumpers.

“I have to have a product for everybody,” said Kfir Levy, Kanvis’ founder and designer. “I don’t want them to be deterred by the price.”