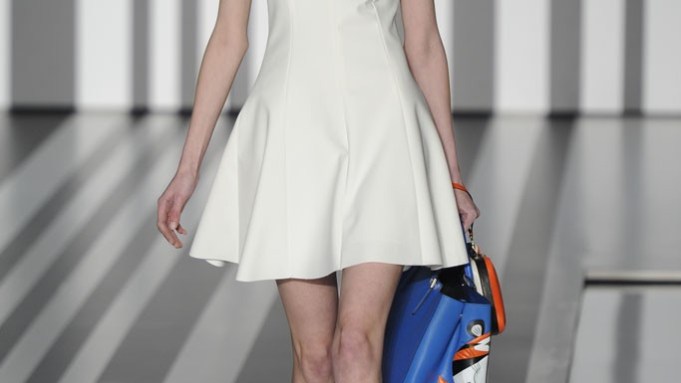 A supermarket dash is rarely, if ever, a glamorous affair, but Anya Hindmarch was out to change that with her fall collection. The designer put her handbags on the Broadway stage with a show that featured models wheeling grocery carts, male dancers and a soundtrack ringing with toe-tapping show tunes.

Hindmarch worked her signature styles with humble branding: Tony the Tiger smiling on her elegant Ebury bag; a series of cylindrical clutches shaped like cookie packages, and evening bags emblazoned with the Ariel washing powder logo. “I love the idea of treating FMCG [fast-moving consumer goods] in a precious way, and I wanted to chose the most iconic, graphic branding beloved in Britain,” said Hindmarch. The bags — in calf’s leather, python and snakeskin — were made with an intarsia technique in which the leather was inlaid and then seamlessly joined.