Berlin designer Bobby Kolade not only jumped off the runway but the show calendar as well. 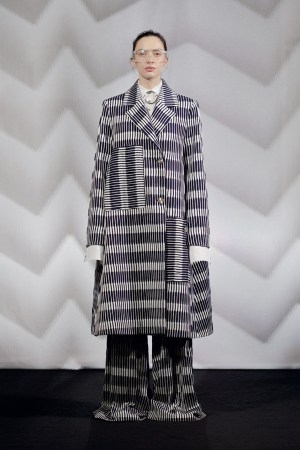 Never one to run with the pack, Berlin designer Bobby Kolade not only jumped off the runway but the show calendar as well. Instead, he chose to engage key editors and stylists in one-to-one presentations on Monday before Berlin Fashion Week began, later opening the installation of photos and hanging apparel pieces to the label’s friends and supporters.

Kolade has significantly polished his high/low fashion tactics for fall, coming up with some impeccably tacky looks like a gathered jersey Star Trek couture top with silver lamé insets, astronaut-blue turtleneck and blue industrial cord belt, worn with improbably wide Man from Glad silver lamé pants cinched on the thigh with blue drawstrings. Noting “a bit of glitter never hurts,” fall’s ultraglitz red fashion joggers were lined in athletic gray jersey for both a visual accent and wearing comfort, the inner finishing almost bespoke in quality. The same holds true for his blazers, hardly conventional but tailored with finesse and unexpected twists, like a built-in high neck floating above wide peak lapels. Kolade’s big coats made an oversize impact, one blue wool version sporting fat wool ties instead of buttons. The no-shoulder bomber already has a fan base, the designer said, with both genders going for the super hero cape in plush-lined navy wool with a semi-attached silver bomber.

All just silly dress-up for fun and games? Kolade is serious about fashion’s play factor, and taken on their own, many pieces have lots of personal gaming potential. He says he’s not needed for normal gear, rather targeting customers who like an element of surprise in their clothes. And there’s a manifesto to his madness, the young designer calling for “curiosity instead of fear…disbelief in definition…and pride in imperfection.”