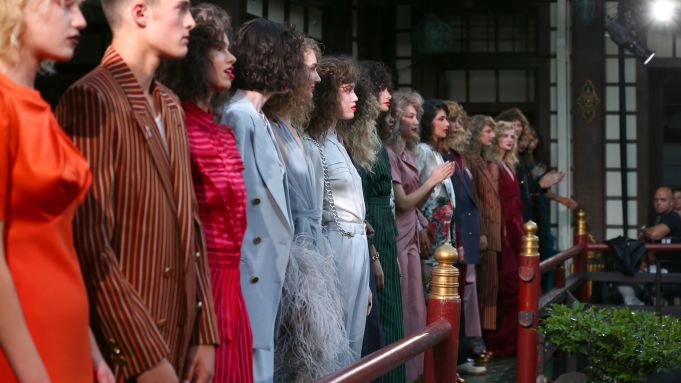 Brian Wolk and Claude Morais have yet to tire of playing with their interpretations of cinema and old Hollywood.

The designers have taken followers along for the ride — through their love of nature and hiking to Saturday nights out — but for resort 2018, their fascination with the City of Angels took cues from the neo-romantic transition between the Eighties and Nineties in a story told through the lens of Los Angeles.

“I feel like we’re showing on a movie set,” Wolk said backstage Monday evening just as guests were beginning to arrive for the label’s presentation.

The setting took that quite literally in some respects with the collection shown in the inner courtyard of Yamashiro, a mansion-turned-Asian fusion restaurant that sits 250 feet above Hollywood Boulevard. The Los Angeles restaurant, the name of which translates to “mountain palace,” transported guests back to 1914 when construction on the structure was completed. The hilltop building, designed to mimic a palace near Kyoto, originally served as a place to store a collection of Asian art and other finds owned by brothers Charles and Adolph Bernheimer.

“There are always layers of inspiration with all of our collections,” Wolk said. “Since we moved to Los Angeles, we’ve always been inspired by Hollywood and cinema and it’s inevitable that cinema sneaks into all of our work being here. We also were inspired by Nineties street culture on Melrose [Avenue] that was amazing for us.”

“The Nineties were important, this neo-romantic end of the Eighties,” Morais said. “The softness, the monochromatic idea of clothing.”

Presented in the Yamashiro courtyard were 27 looks that managed to successfully weave together what Wolk likened to a tapestry of theater as seen in the feather robes used in the show that were designed by Catherine D’lish and Nineties streetwear, which came through in monogrammed tanks, silk jumpsuits and striped suiting.

“We went back to our tailoring,” Morais said. “And we softened everything in a very casual tailoring.”

It’s what, Morais said by way of example, a Nineties-era Johnny Depp might have worn perhaps on Melrose Avenue that helped inspire the collection’s fit and silhouettes.

In a way, the collection played with and balanced opposites, softening the hard edges of men’s wear with architectural shoulders that managed to skirt the drama of the Eighties and romance juxtaposed with modernity.

“We started with the jewelry last season with the oversized necklaces and safety pins and it evolved into suspenders on this striking men’s suiting,” said stylist Elizabeth Stewart.

The looks in totality proved an evolved take on the designers’ love for their relatively new roots in Los Angeles.

“It’s funny because we showed in New York for over a decade and since we moved to Los Angeles, I don’t think as designers we’ve ever felt so inspired by the freshness of the city, by the art in the city, by this cultural happening and synthesis that’s going on here right now,” Wolk said. “The energy is palpable and we’re just really excited and inspired to be here every day.”