A Seventies New York City theme featured in the cogender show, along with local artist collaborations for Rexy, the dinosaur. 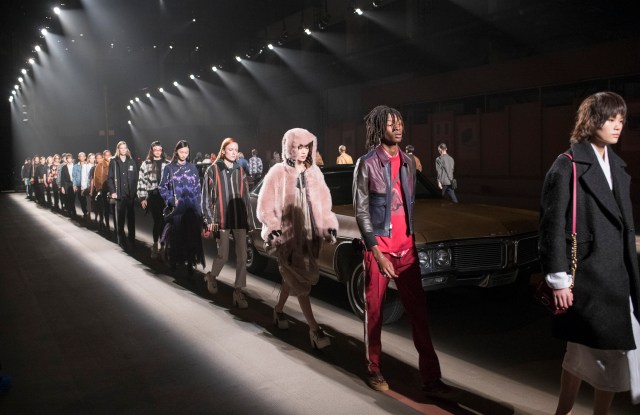 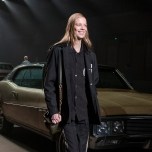 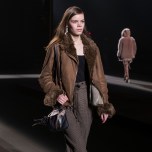 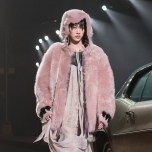 SHANGHAI — As far as bygone New York City eras go, the Seventies with its disco balls and grungy graffiti-splattered walls is one of the most fondly remembered — and it was this slice of life that Coach re-created at the West Bund Art Center, parking vintage Mustang replicas beside the runway and blaring police sirens and hip-hop beats.

Actress and Coach campaign face Chloë Grace Moretz came to hang out, as well as Ji Soo and Rosé, band members from the K-pop group Blackpink. Hannah Quinlivan, the model and wife to Taiwanese superstar Jay Chou, also came to view the dual-gender collection, which featured varying handkerchief hemlines and a more colorful palette than seen in the past two seasons. The show contained only small bags, perfect for the wallet-less China WeChat generation.

With so much tense talk between U.S. and China over trade the past few months — the two sides only last week came to a temporary tariffs truce — a Shanghai show from a New York house acted, if only in its own small way, as counterpoint.

For Coach, the motivation to hold the show was its 15th anniversary in China, a country which now figures as its second-largest market after North America. It first did business here with a local partner, verticalizing in 2009. Now, it counts 190 stores in greater China, and the country is expected to outpace global growth.

Not that the growth isn’t hard-won. With the number of international fashion shows and events that take place in Shanghai now, it can be quite a task for brands to stand out. Miu Miu staged a show last month, and of course, there was a great, big show that didn’t happen for Dolce & Gabbana. In September, fellow American Tommy Hilfiger used the Pudong skyline as the runway backdrop. So it helped that Coach approached Chinese creatives to collaborate on looks directly: graphic artist Guang Yu, sculptors Zhu Jingyi and Sui Jianguo, and the music collective, Yeti Out.

“All have very different styles, different profiles,” creative director Stuart Vevers said of his collaborators, adding that he’d been impressed on previous trips to Shanghai by the strength of its contemporary art scene. “I invited them to interpret Rexy, the Coach dino, in their own way. When I was in China talking to people, Rexy has really cut through. She’s cut through in a lot of places but it felt even more powerful here.”

China has also taken on shearling eagerly, another signature of Coach under Vevers, he shared.

“It had a particularly strong reaction,” the designer said. “Even though this is a pre-fall collection delivered May-June, we do have a few pieces. If something’s really special, we can make it work at this time as well.”

Apparel overall has done well for the house here, leaving little doubt to the maturity level of the Chinese customer. “The Chinese customer has been among the most enthusiastic globally to embrace Coach’s full lifestyle offering,” Joshua Schulman, the brand’s chief executive officer, said. “In fact, our business in China has the highest penetration of women’s and men’s ready-to-wear in the world.”