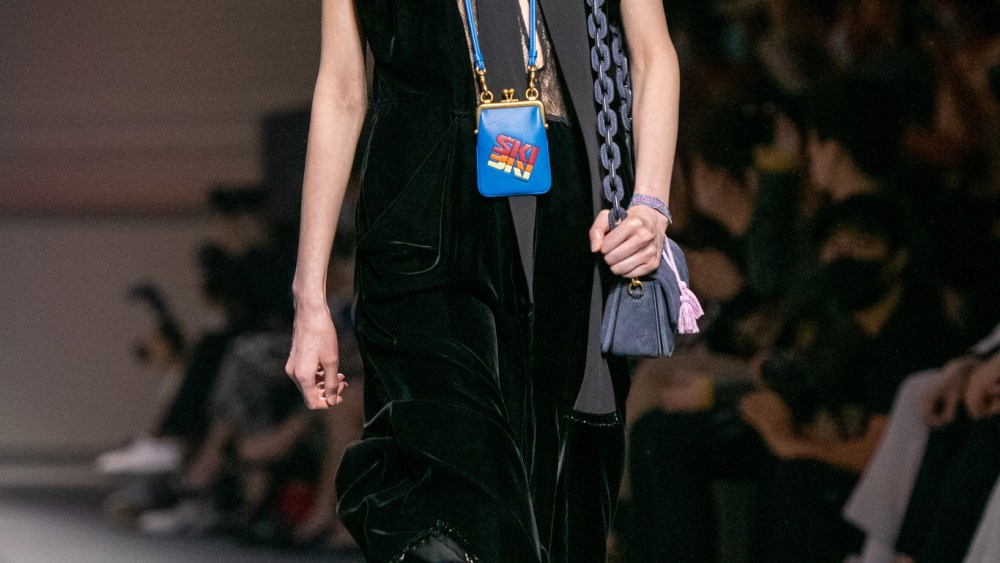 SHANGHAI — For its return to physical showcases, Coach leaned heavily into nostalgia, an idea it introduced last season, but played with strong ski references for its first stand-alone winter line.

The brand built a vintage drive-in theater at the Shanghai Exhibition Centre, where a large screen playing Coach: TV clips, falling fake snow, and roller skaters at various times broke up the show into segments.

“I’ve watched and rewatched a lot of old TV and films [during the pandemic],” creative director Stuart Vevers reflected. “I’ve gravitated toward things that give a sense of comfort and that’s what nostalgia does.”

“The way we approach nostalgia at Coach: TV, it’s surprising from the world of fashion. I think fashion is known for its polish and slickness and we deliberately have gone against that,” he said.

The show, which was later streamed on Coach’s channels, drew about 340 guests, including brand ambassador and actress Yang Zi; singers Jam Hsiao and Kelly Yu, and actors Ding Nan and Wallace Chung.

The 45-look women’s and men’s collection featured retro striped jackets, pastel-colored snow boots, and dresses in velvet or metallic lamé that were a hopeful throw to dressing for the future, Vevers noted. Some pieces were technical ski wear but more riffed on the sport’s style references for city wear. As reported, the show also included some of Vevers’ favorite pieces from his fall collection, restyled for the runway since they had not been seen on a runway before.

While there were also new styles, these continued the themes Vevers laid out for fall in terms of color and silhouette since his goal was to “build on what we started.”

As he told WWD late last month: “Last year, I made a commitment to evolve how we do things at Coach, and today, this includes approaching seasonality in a more honest, authentic way.”

While the China event would seem to be a natural nod to the Beijing Winter Olympics which kicks off next February, the brand avoided any mention of the Games, which has been the target of some boycott talk in the West over Xinjiang’s cotton issue and human rights.

“It’s not a collection for China, it’s a collection for the world but that is displayed and discovered in China,” said Tapestry Asia chief executive officer Yann Bozec. “There was this notion of having people having fun and getting out in the nature.”

It has been over two years since Coach last staged an event in China but the house plans to return much more frequently from now on. In the most recent quarter, parent Tapestry Inc.’s Mainland China revenue soared 175 percent compared to a year ago and was 40 percent above 2019. In addition to Coach, Tapestry owns Kate Spade and Stuart Weitzman.

“What we would love to do with Stuart is make sure every year in May or June we will have a big fashion show in China,” Bozec said, adding, “We are already working on the concept for next year.”

Clearly China is a key focus for Coach, as it is for many brands. “[In the] next year, we will open 20 to 30 stores in China mostly in tier-three or tier-four cities, mostly in department stores and malls,” Bozec said.

Exclusive: Coach to Host In-Person Show in Shanghai on June 3