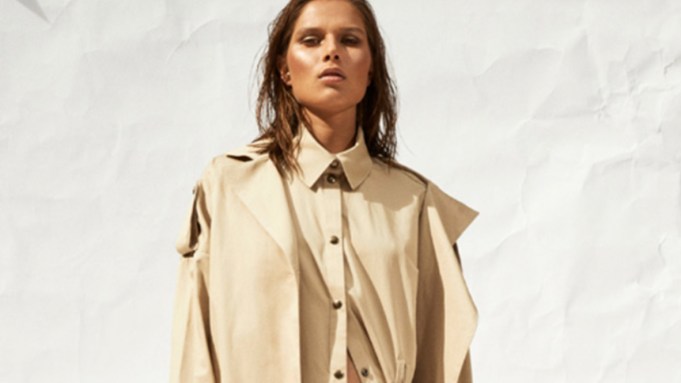 BRIGHT YOUNG THINGS: Boyarovskaya, Airvei and Nicolas Lecourt-Mansion are the newcomers at the Designers Apartment initiative this season, joining growing labels including Dawei, Mazarine and Kenta Matsushige in the lineup.

The showroom, which serves as an incubator for young France-based design talent, runs until Tuesday at the Palais de Tokyo.

Boyarovskaya — founded in 2016 by designer Maria Boyarovskaya, who previously worked at Givenchy and John Galliano, and Artem Kononenko, a photographer — offers innovative, minimalistic outerwear with quirky details – a biker jacket, for example, with a strap like a bag so it can easily be carried over the shoulder, or a two-fronted trench coat.

Young designer Nicolas Lecourt-Mansion, meanwhile, presented his second collection, which could perhaps be situated somewhere between couture and fetishism, combining corsetry techniques with tailoring. His first collection was already picked up by H. Lorenzo, which has already written orders for the second, the Lecourt-Mansion said.

Among the returnees, Quoi Alexander presented a collection made by pleating and weaving strands of fabric into weighty but fun, colorful designs, proving his growing ease.

As well as his core collection of minimalistic basics with a twist, which included a fun caramel-colored t-shirt dress with interesting stitching details, Kenta Matsushige was unveiling a collaboration with La Redoute to launch next February.

The capsule of striped cotton pieces, as well as being offered by the catalog retailer, will be available to boutiques wishing to offer the designer’s pieces at a more affordable price point.

Staged by the Fédération de la Haute Couture et de la Mode, Designers Apartment is backed by the DEFI (the French Committee for the Development and Promotion of French Clothing).