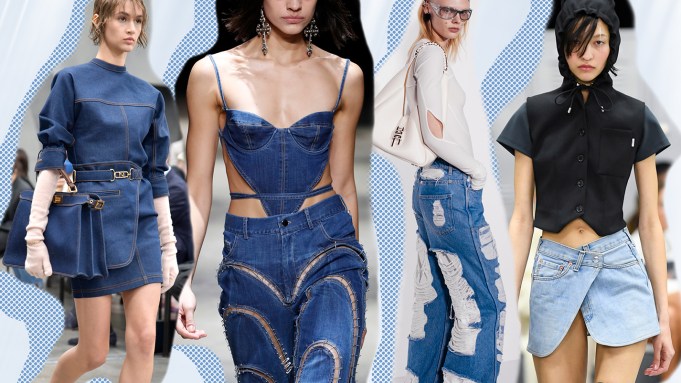 Nostalgia of the ’90s and early 2000s was the main inspiration for designer denim in the fall collections. Denim cropped tops and miniskirts, low-rise jeans and the boyfriend skater style took the lead. Glenn Martens’ Diesel, his first physical show since taking the creative helm in late 2020, delivered an extensive lineup of early 2000s favorites, including low-waisted pants, miniskirts, second-skin stops and asymmetric silhouettes.

Martens’ mastery of reinventing the shape of garments mixed with his artisanal know-how resulted in an array of dramatic head-turning oversized coats and other statement pieces. “There’s no point in going into the fashion week calendar without creating a bit of drama,” said Martens. The nostalgia approach was the perfect catalyst to engage Gen Z while starting to turn Diesel back to the leading position in the denim world.

Vetements, another Gen Z favorite, presented a great selection of baggy skater-inspired jeans and other 90s-inspired oversized silhouettes, some featuring logo graphic designs reminiscent of youth raving cultures. Acne Studios designer Jonny Johansson played with the idea of upcycling for fall that resulted in visually appealing patchwork denim gowns and hyper high-waisted paper-bag maxiskirts. “A lot of people want to have something personal, something that says ‘I’m real,’” he said of the younger generation’s love of do-it-yourself and personalization.

“I wanted to do something that was tight, body-conscious, with a Y2K spirit,” said Isabel Marant of her fall collection. That inspiration worked perfectly in the denim offering. Looks from low-rise cargo white jeans to a baggier acid-washed pair with a matching cropped racing jacket brought memories of the glory days of MTV.