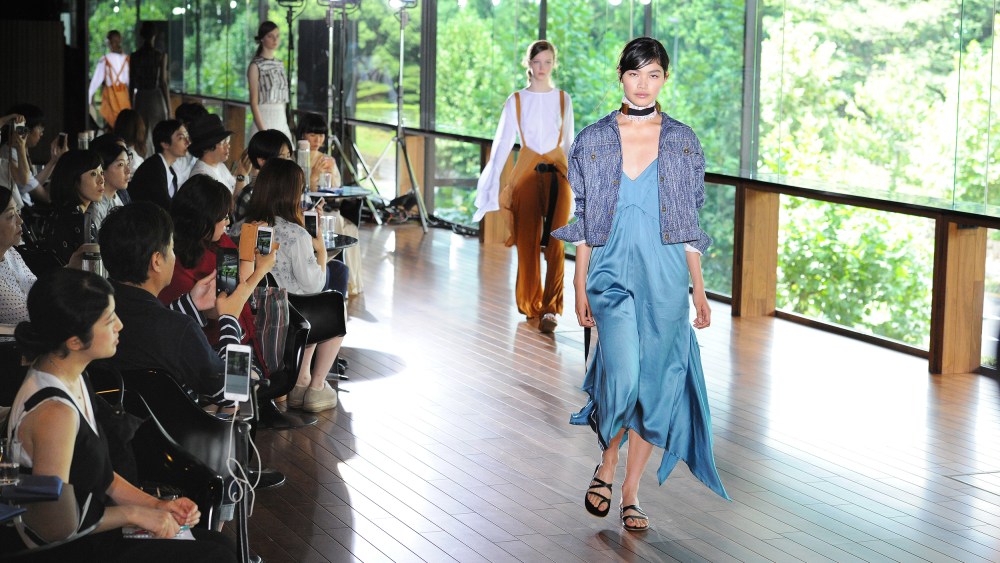 Lamarck‘s Shinsuke Morishita chose to show his spring collection nearly two full months ahead of Tokyo’s official fashion week, which is set to start on Oct. 17 in collaboration with new sponsor Amazon Japan. The designer said he was eager to secure orders from local buyers before they set off on their tour of the world’s major fashion weeks — several other Japanese designers have voiced a similar refrain out of frustration with the late start to Tokyo Fashion Week.

For his show on Tuesday, Morishita chose a café space with warm woodlike flooring and floor-to-ceiling windows that look out onto the leafy grounds surrounding the home of Japan’s crown prince.

Morishita’s theme for spring was “clear and serene.” He turned out chic, fluid silk jumpsuits and skirts in navy, silver and gold. There were also cropped camisoles, tailored trousers and moto jackets in a slub denim that looked almost like tweed from a distance. There was an abundance of lightweight knits in open, textured patterns that showed patches of bare skin for subtle sex appeal.

The designer played with volume and proportions, showing full, gathered skirts and wide-leg pants alongside tiny cropped camisoles and slim pants. Shirts and blouses often had exaggerated long sleeves, sometimes with a flared, handkerchief hem. Overall, it was a solid offering of well-cut, stylish looks with unexpected details such as asymmetrical silhouettes and tufts of fringe. At a time when high-tech fabrics are becoming more and more prominent, Morishita’s use of natural materials such as silk and cotton felt refreshingly appropriate for spring.