The collection includes apparel, shoes, handbags, jewelry and sunglasses retailing from $12 to $300.

By Sharon Edelson and Lisa Lockwood on September 10, 2015
View Slideshow 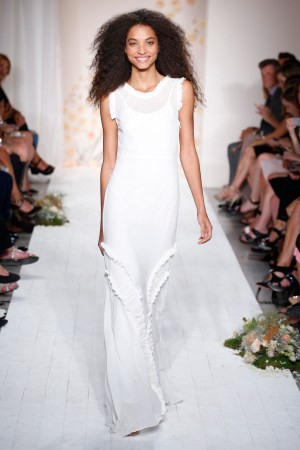 “I’ve been working on this line for so long,” said Conrad, prior to the show. “I’m involved with the creative in every way. It was a lot of work.”

Knowing that the fall collection would be shown on a runway, Conrad said she and the team wanted the inspiration — an enchanted forest — to carry over from the clothes “to the whole show, from the floor to the seating. We wanted it to [convey] a location.”

Lace, crochet, florals, embellishment, tulle and sequins were evident throughout the vintage-inspired collection’s dresses, skirts, blouses, jumpsuits, jackets and pants. Looks ran the gamut from a lace baby-doll minidress to a lace open-back jumpsuit to a floral jacquard crop top and midi skirt to a sequin pleated maxi dress in antique ivory.

“You get to dictate a completed look on the runway,” said Arthur Lewis, executive vice president of product development at Kohl’s, pointing out that this was the first runway show entirely sponsored and executed by the retailer. “We showed as many looks as a traditional fashion house. This is definitely an elevated collection.”

Conrad’s collection always finds inspiration in vintage styles. “It makes pieces feel really unique and special,” she said. “They feel almost found, not new. I love a bit of charm in my clothes.”

“We want to see this brand grow, and in best way possible way, so we’re slowly rolling out categories,” Lewis said. “Handbags were the next step for us.”

“I wanted them to feel very classic,” Conrad said. “The quality is amazing. All except for one are made of leather. They are so beautiful.”

The runway show was live-streamed at LCRunway.com and the capsule collection became available for purchase immediately after the show. A select number of pieces will be offered at all Kohl’s stores, Lewis said.

The collection spans apparel, shoes, handbags, jewelry and sunglasses and retails from $12 to $300.