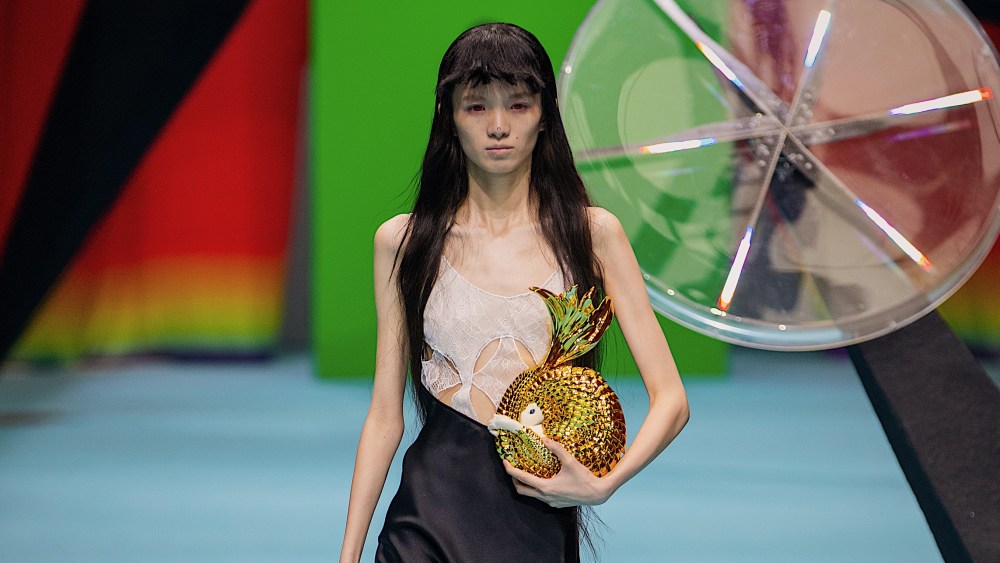 SHANGHAI — Louis Shengtao Chen had yet another stellar season at Shanghai Fashion Week. In the same week the Chongqing-based designer presented his sophomore collection, he also took home an award at the inaugural Hu Fashion Forward Prize in the newcomer category.

The clothes in his second show were an ode to the designer’s “individual romantic journey,” Chen said, and rose out of musings on the song “‘Romance Anomino’, the first tune that Chen learned to play on guitar.

Some of the silhouettes recalled madame vibes but Chen leans on a softer fabrication to loosen them up, adding a flouncy skirt or a hint of lace here and there. The collection had a mythological streak to it with Cupid prints, large Pegasus feathers tucked behind the ears of models, and looks that were accompanied by a range of fantasy creatures, such as a rabbit with wings.

“This runway was a carryover from the Debutante collection last season,” Chen said. “In April, the show was in a black room and we only had a projector which symbolized a black hole universe on the runway. This season, those things finally landed on the earth and the sparkles and stars are crashing into the land. We had these rainbows and this blue carpet on the ground. So second season, we landed to the earth and I’m more starting to think about real people wearing it, something more practical.”

Now with his debut fall collection finally getting into the hands of customers, just who is the Louis Shengtao Chen woman?

“It’s a mature woman, but I’m not talking about age,” said Chen. “It’s talking about the attitude, which is a very sophisticated woman. There’s a lot of desire for colors, desire of lace, transparency, of midi skirts, long-length dresses, always something mature.”

And sometimes not a woman at all.

“The market feedback was very surprising,” Chen said. “Lots of boys came to the shop and bought the pieces. It looks super nice and sexy on them but I never intend to express that gender fluidity, even though I am a male designer. I focus on women’s wear, but those younger male customers that buy the pieces, they buy my lace tops and it looks so surprisingly nice on them.”