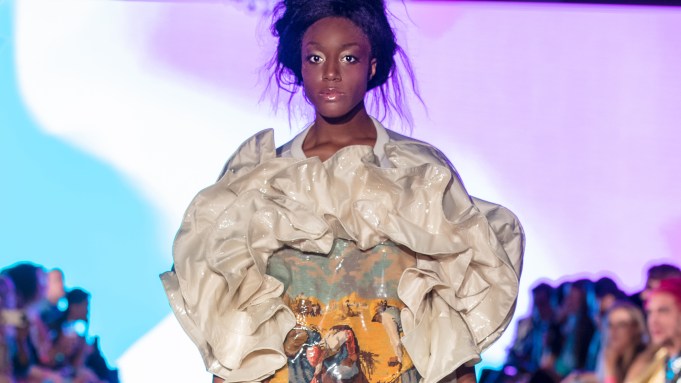 MaryMe-JimmyPaul brought the concept of a collage to life for spring.

The Amsterdam-based designers, who showed at their first Los Angeles Fashion Week in a bid to expand their distribution and brand on the West Coast, got crafty in a nod to the makers movement with the looks they sent down the runway.

“This is a collection of repurposed items,” said designer Marie Burlot. “We find material to transform but we also buy new material and transform them so the inspiration’s quite broad.”

Burlot, who makes up one part of the eight-year-old line with Jimmy Rinsum, called the collection an eclectic mix of materials.

“We try to find the balance between what is ugly, in a way, but make it so beautiful with new materials, like embroideries from France,” said Burlot, likening it to arts and crafts.

Really, the star material of the collection was plastic for jackets and dresses that weaved in interesting curiosities, such as hair or feathers, something they began experimenting with several seasons ago. There’s also knitwear dipped in latex and a plastic gown.

The duo teamed with Dutch interior design firm Fatboy on rain coats that were shown on some models who walked down the runway. If all goes well, Rinsum said, they expect the coats to be on sale next year.

The person who wears MaryMe-JimmyPaul?

“She should be very cosmopolitan and not really afraid to stand out,” Rinsum said. “She knows what’s going on in the world and isn’t afraid to play with fashion.”