Monopolis! took place on a set made up of sculptures and installations designed by Chinese contemporary artist, Liu Wei. 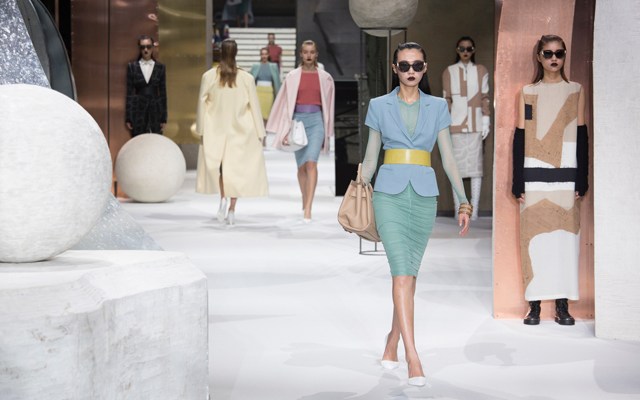 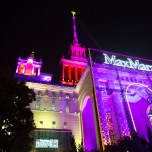 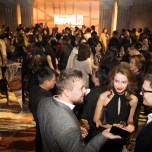 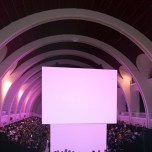 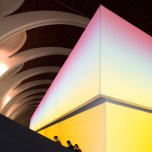 SHANGHAI — A chilly Thursday evening in Shanghai provided a perfect opportunity for Chinese celebrities and other VIPs from around Asia to break out their best Max Mara outerwear for the brand’s pre-fall show.

The event, titled Monopolis!, took place on a set made up of sculptures and installations designed by Chinese contemporary artist, Liu Wei. It was held at the Shanghai Exhibition Center, an ode to Soviet-era architecture on the downtown shopping thoroughfare of Nanjing Road, and drew actresses Tiffany Tang, Jiang Shuying and Zhang Tianai.

The models navigated Liu Wei’s dystopian urban landscape with a minimalist bent. A white sphere hanging from the roof was a focal point, with mirrored surfaces and smooth-edged freestanding boulders in eggshell and metallic finishes on either side of the runway.

“Every opportunity should be somehow challenging, not too safe. I don’t see any reason to take a show first presented in Milan and bring it to Shanghai, I want to bring something new here,” said Max Mara chairman Luigi Maramotti. “We are showing this collection for the first time and showing it in a way that is very special, along with this collaboration. We have customers coming from around the world here and it’s a big celebration of Max Mara.”

The 11-piece limited-edition capsule collection, a collaboration with Liu Wei, was shown in conjunction with the main pre-fall line on Thursday and made available immediately after the show on the Max Mara web site, as well as 45 of the brand’s flagship stores around the world.

“There has been a lot of, almost ideological debate, about see-and-buy-now,” Maramotti said. “I looked at all this debate on see-and-buy-now as an opportunity to experiment. We are not stating that the future is see-and-buy-now…maybe it’s [just] interesting to do a collaboration with an artist, and why not sell a few pieces the moment we show them?”

The collections featured plenty of Max Mara’s signature tailoring in the form of knee-length pencil skirts paired with lace-up boots, and trousers cut slim and tapered as well as wider-leg styles.

Texture was a feature of the collection, with harder-edged, head-to-toe black leather looks sandwiched between all-white ensembles featuring fluffy white outerwear. Suede, leather, furs and jacquard were often constructed in patchwork styles in the familiar Max Mara palette of white, black, navy and camel and the show was rounded out with pastel printed silk dresses and jumpsuits, and color-blocked suiting, also in a pastel palette.

More than 15 years after first entering the China market, Max Mara now has more than 300 stores in Greater China — including Hong Kong and Taiwan — and, having extended its reach as far as the country’s third-tier cities, currently has little appetite for aggressive expansion in the near-term. He declined to discuss sales in China but said the brand is seeing single-digit growth around the world.

“China has had a huge period of growth over the last 15 years. It has been tremendous in quantity, but maybe it hasn’t been so tremendous in quality. I think we are facing a period when we have to make sure the real value stays,” Maramotti said. “More than continuing expanding, it’s more about rooting the brand, which is more complex than expansion. It means everything you do, you do it properly and you do it in-depth.”

Another ongoing challenge for Max Mara in China is fighting counterfeit products. Though the company works with local Chinese authorities from its base in Italy to combat the still pervasive market for fakes in the country, Maramotti said the size and complexity of the country makes enforcement a difficult task.

“We have to keep fighting against it. I tend to say that as the culture of the consumer grows, also counterfeit products lose their momentum. This will happen in China,” the executive said.