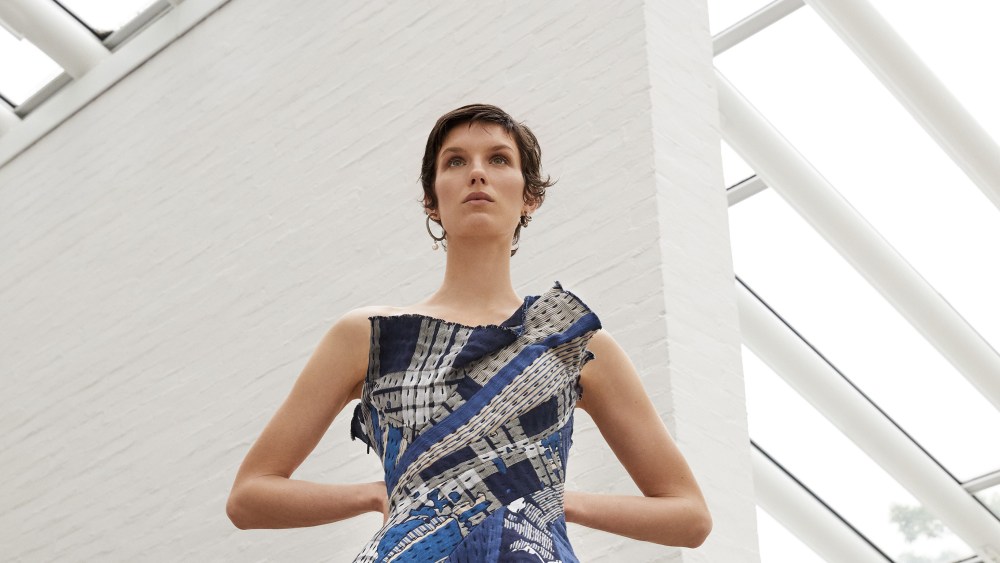 “Japan,” Laura Kim stated the starting point for her and Fernando Garcia’s resort collection for Oscar de la Renta, the theme not readily apparent form a quick perusal of the racks during a showroom appointment on Thursday. “It’s not obvious,” Kim said. “We looked to the Meiji era, when Japan opened to Western culture.” She referred to the reign of the Emperor Meiji, under whom Japan transformed from feudal state to a modern power during his reign in the late 18th and early 20th centuries.

Among the period references thus examined: photos of men in lavishly appointed military garb, from which the designers distilled elements of ceremonial hardware. Hence, dangling gold chains figured prominently in a chic navy group, draping the waists of a curvy dress with deep-V neckline and trousers worn with a matching top and ivory tailored jacket, forming an intricate asymmetric web on the torso of a one-shouldered goddess gown. Other nods came in abstract seaming that referenced the country’s “mending culture,” and various florals, including a full-length panel that ran the back of a khaki trench and another panel that decorated the inside of an otherwise unfettered, elegant black kimono-inspired coat.

Throughout, there was a recurring dialogue between fluidity and structure, and sometimes, each stood on its own. Particularly at night, when the Oscar woman loves to shine. The designers offered her plenty of options, including diaphanous beauties worked variously in endless pleats and jeweled tulle. And, for the young woman with a bit of sass: a structured deb gown in an engineered multipattern cotton-wool, inspired by a piece of vintage patchworked Japanese denim. This one was obvious — obviously amazing.