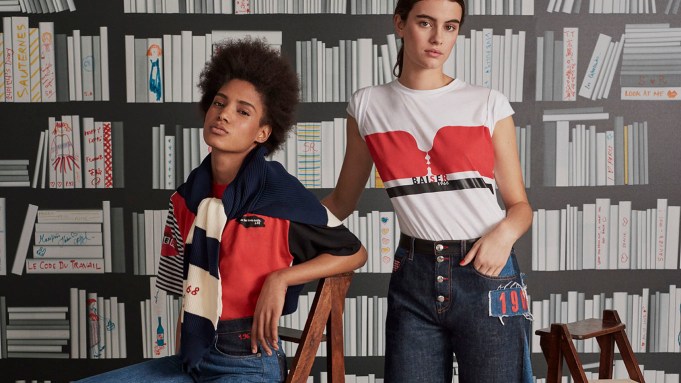 Over at 175 Boulevard Saint-Germain-des-Pres in Paris, there is but one crystal clear New Year’s resolution: “To make 2018 the year of Sonia Rykiel,” said Jean-Marc Loubier, chief executive officer of First Heritage Brands, owner of the house, which is ringing in its 50th anniversary with a docket of celebratory events and product launching over the course of January to December to recognize the spirit of the woman who started it all in 1968.

Sonia Rykiel, who passed away last year at the age of 86, was an iconic figure, a legend in France where fashionwise, she was synonymous with stripes, knits, sequins and Twenties-tinged silhouettes, but on a broader cultural level, she came to represent an ever-optimistic liberated, feminist spirit and Rive Gauche attitude. The combination inspired an extremely devoted fan base. Rykiel’s Paris fashion shows were often a display of national pride for which French fashion editors came out in droves and models walked the runway with the rarest of catwalk accessories — genuine smiles. “What I found really at this house which was that in the Seventies, Eighties and Nineties there were women cloning themselves after Sonia Rykiel,” said Julie de Libran, who has been the brand’s artistic director since 2014. “They wanted to look like her with the red hair and wearing all back. It was quite a dedication. It’s quite rare. Maybe you get people in the music business or celebrities who people want to look like but to do that for someone in fashion?”

The brand’s golden jubilee kicked off earlier this week with the opening of an installation by artist Jaro Varga titled “Manifesto” which made its debut at the Sonia Rykiel flagship at 175 Boulevard Saint-Germain and is expanding to the Rykiel stores in New York, London, Tokyo and Seoul, as well as The Webster in New York. A store party Tuesday night drew a flurry of French actors and influencers, including Noémie Merlant, Alice David, Julie Ordon and French pop star Corine, who performed.

De Libran designed a capsule collection, drawing on Rykiel’s love of books, stripes and knits to accompany the installation, which is also book-centric. Varga transformed the walls and facades of the flagships into a library of blank books on the spines of which visitors are invited to write their own messages, whether Rykiel-inspired or not.

“Sonia Rykiel was a woman of words and a woman that used the platform of clothing to pass a message but also to create a certain fun and joy,” said de Libran, who gleaned a lot of inspiration from a little-known book called “Dictionnaire déglingué” that Rykiel originally published in 2002. Written in French, it was a Rykiel’s personal dictionary in which she wrote about words, some of which she invented her own definitions for. De Libran translated the dictionary onto the clothes by embroidering words, some of her own favorites and some of Rykiel’s, but all containing the letters “S” and “R” for the brand’s initials. The words’ definitions are embroidered on the inside or the back of the garments, “so you have to discover them,” said de Libran.

A striped T-shirt with the silhouette of two kissing faces across the bust, almost like a trompe l’oeil bustier, is printed with “baiser.” A shift dress with exaggerated sleeves says “sauternes” across the collar. A clingy striped knit dress says “175 Saint Germain.” And a sweater is embroidered with “s’aimer.” Many of the pieces are emblazoned with “1968,” which de Libran pointed out, while 50 years ago, has a lot of relevance today.

“In 1968 in Saint-Germain-des-Pres, it was kids from schools and women protesting and wanting freedom of speech,” she said. “It’s incredible that 50 years later what’s going on in the world is not that far away from that… this celebration is about a wonderful woman who 50 years ago did what she thought was the right for women to liberate their bodies and to make clothing that was joyful and joie de vivre.”

The next chapter of the 50th anniversary celebration will be de Libran’s Paris runway show in March.