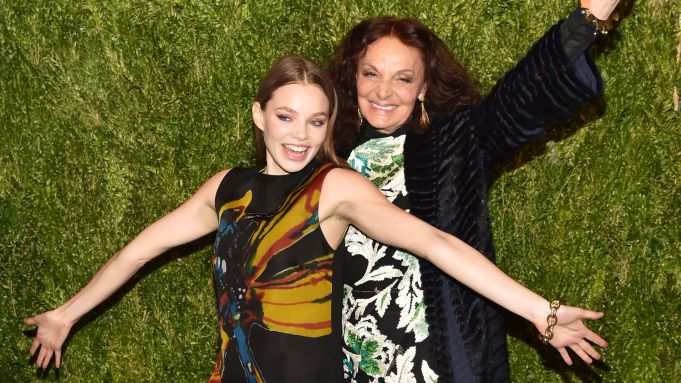 It’s been 15 years since the CFDA and Anna Wintour put their fashion muscle together to promote and mentor emerging design talent in the U.S. with the creation of the CFDA/Vogue Fashion Fund. The annual gala was held Monday night at the Brooklyn Navy Yard, where Wintour and company showed they know how to put on a pretty dinner and pack it with pretty interesting people. The Rev. Al Sharpton was there. So were Olympic gymnast Aly Raisman, Huma Abedin, La La Anthony, Lourdes Leon and American fashion establishment such as Michael Kors and Zac Posen.

The gala served as a showcase for the 2018 participants in “the Fund,” as it’s known, and as a reunion for the many designers who have passed through its doors. The program was printed with all the past finalists’ names — many are still around; just as many are not, a reminder that winning the CFDA/VFF offers a great boost in visibility and a cash injection, but it doesn’t guarantee long-term success.

After Wintour and CFDA chairwoman Diane von Furstenberg gave their opening remarks, a video reel of the past CFDA/VFF experiences played, showing just how different a world it was in 2004 when Michael Bloomberg, then the mayor of New York City, mispronounced the name Proenza Schouler when presenting Jack McCollough and Lazaro Hernandez with the Fund’s first award. It’s wild to think that that was long before Instagram. It was before names such as Alexander Wang, Joseph Altuzarra and Jason Wu were part of the American fashion vocabulary. Heck, it was before “The Devil Wears Prada” even came out, and it was way before Donald Trump was president.

On that note, the evening had a certain element of déjà vu to it. Two years ago, the gala fell on the eve of the presidential election. Wintour’s signature chicken pot pies were branded with the word “vote” stuck with little toothpick flags bearing the Human Rights Campaign logo. This time, on the night before the midterm elections, the pot pies were free of political paraphernalia, and there was no giddy certainty in the air that fashion’s favorite candidates would triumph. Wintour and von Furstenberg were sure to encourage the crowd to go out and vote in their speeches, while dinner table conversation inevitably turned to Trump in one way or another. David Neville and Kenneth Cole traded tales of bizarre golf course encounters with the president.

But back to the fashion. Whether because it was an anniversary year or just because, the 10 finalists’ work was presented via a live fashion show/performance hybrid that was very reflective of the times, it gave the audience the “experience” everyone is always talking about, and provided a slew of Instagrammable moments. Content everywhere. If it was good fodder for all the social media feeds in the room, it was also good fun to the see the collections live and in motion. Pyer Moss’ lineup was worn by a choir, performing 4 Non Blondes’ “What’s Up”; Bode’s was shown via tap dancers; Jonathan Cohen had an aerialist; Christian Cowan had drag queens lip syncing to En Vogue’s “Free Your Mind;” Luar had some kind of arty bridal procession; Hunting Season had bopping Mod chicks; Scosha had models in artful flower crowns; Rebecca de Ravenel had retro heroines on Vespas; Bathsheva had prairie girl power, and Matthew Adams Dolan had dancers in his denim.

After the show, things came full circle. McCollough and Hernandez introduced actress Emily Blunt, who played Miranda Priestly’s assistant in “The Devil Wears Prada” all those years ago, to announce the runners-up and winners. Emily Adams Bode of Bode and Jonathan Cohen were the runners-up, and were each awarded $150,000 and Kerby Jean-Raymond of Pyer Moss, who’s been having quite a year, took the top prize of $400,000. He admitted he was “apprehensive” about the program at first, but it worked out well. “I’m going to say something that Anna probably doesn’t want me to say, but she’s a really nice person,” said Jean-Raymond in his speech, before turning to Blunt. “Your movie didn’t do her justice.”