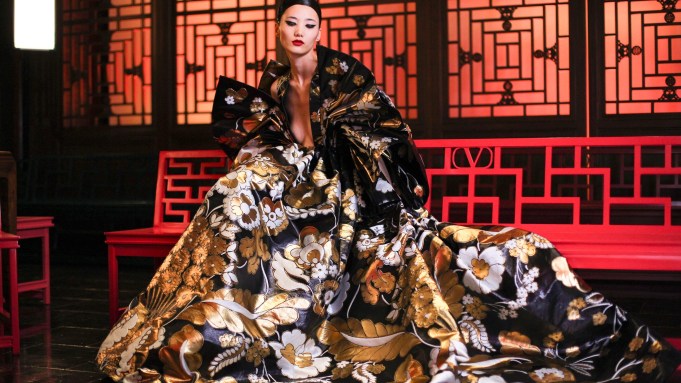 BEIJING — Most brands when they host a show in China, as Valentino did here on Thursday, amp up all the references to the country as much as possible. Not so for the Roman house, which debuted a new couture collection here, outside of its regular calendar.

The venue was unmistakably Chinese–held on the northwestern edges of the city at the Aman Summer Palace, a resort that sits right at the doorstep of the former opulent retreat built for Qing dynasty emperors. But Valentino’s creative director Pierpaolo Piccioli underscored, “it is a classic haute couture Italian collection,”

Rather, Piccioli hoped people would think of it as a daydream, the title of this particular collection, in which two ancient capitals – Renaissance-era Rome and imperialistic Beijing – engage in a dialogue.

He further elaborated: “It’s keeping your identity and maintaining your diversity, but living together — which I think is good in life in general, not just for a collection.”

Operatic music flowed through the series of narrow chambers and corridors of the Aman resort for a show that felt intimate despite its more than 600 guests. Just the night before, Valentino treated guests to dinner at TRB Hutong where there were parallel but contrasting performances by singers in the Chinese operatic tradition, including Ayanga.

In total, there were 45 looks and 45 seamstresses flew to the Chinese capital to ready the collection, which was witnessed by a front row that included actresses such as Shu Qi and EXO boy band member Lay Zhang, who headlined the after party.

Many of the models had a full face of silver glitter applied, lending a futuristic touch to Piccioli’s inspiration, derived from the paintings of the old art masters. Twisted bows featured throughout in all sizes, mixed in with flower details, capes and voluminous shoulders. Traditional Renaissance motifs on jacquard were made modern by switching to shades like green and pink.

As you would expect from a show from a house associated with a signature red, in a country that also is well known for its penchant for red, the shade dominated in the outfits of the audience and also appeared in a number of looks. Piccioli pointed out he had created a special shade of red for the night, which was a mix of three hues that he referred to as Daydream Red.

“This is a combination of Valentino red, and a very Valentino pink, which is more in my world, and Chinese red,” he said.

“Of course, we don’t have 600 couture clients in China,” Piccioli said, “but I want the people to dream about Valentino. It’s about sharing a moment, an emotion, an idea in order to give an idea of what Valentino is.”

One of the final looks sure to dominate social media was the apparition of a model who wore a head-to-toe silver shimmering gown. It was paired with a similarly shaded head covering and a face covered in glitter, although its metallic tone made it more alien than saintly.

Another highlight was the gown worn by the model Du Juan, which had a supernatural, very 3-D effect with the flower detailing appearing to grow like barely tamed weeds out in all directions from the dress.

“I liked the idea of the embroidery not on the dress but in the air surrounding the dress, like an aura, a vision,” Piccioli said.