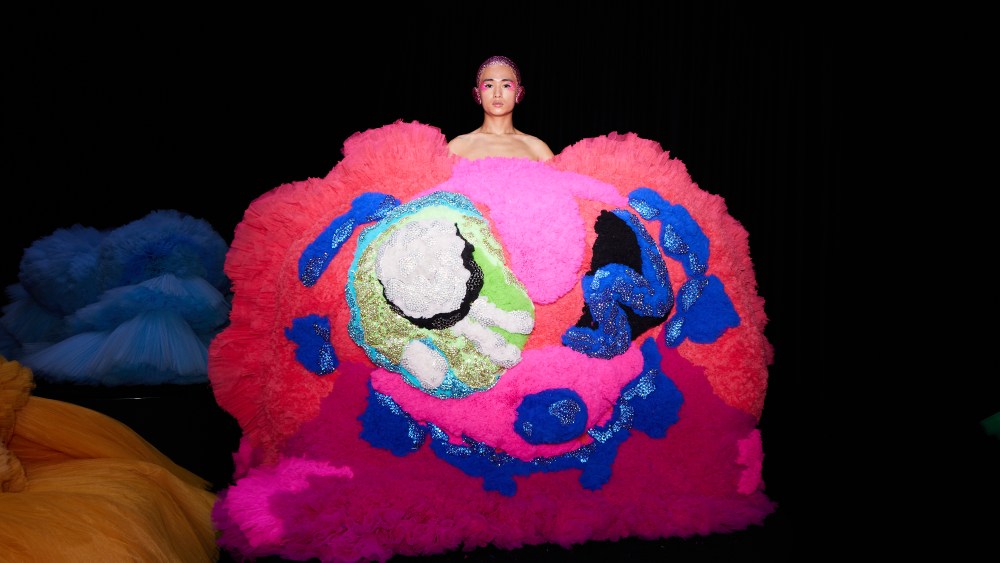 SHANGHAI — Even as a student at the Royal Academy of Fine Arts, Windowsen designer Sensen Lii picked up enviable buzz for his dramatic sporty-couture aesthetic, with his designs finding their way to stars like Rita Ora and Priyanka Chopra. He always had plans to launch his own brand, but after graduating in 2019 and returning to China at the end of that year what followed was an extended pause.

“Around me I had so many friends, they were very quick to launch their own brands,” Lii said. “As soon as they graduated they started collaborating with showrooms, doing shows, going to Milan and Paris. They told me how it felt…Then for various reasons and because of COVID-19, I couldn’t get what I wanted to do done.”

So Lii spent 2020 working on other things instead, like styling, artist collaborations and some concert costume pieces. “I could connect with people who were outside of fashion but still had relevance to my work in fashion,” he said. “At the second part of 2020, I finally felt ready.”

With the benefit of a long break during which the designer had time to fully steep in his ideas, Lii produced a forceful show that included not one but two collections — both ready-to-wear and couture — that felt like a cross between “Black Mirror” and Burning Man.

In the ready-to-wear range, Lii imagined that mutated beings from the future had entered our midst. This was visualized in enormous 3D-printed sunglasses, PU chest pieces, hoodie silhouettes and drawstring detailing, although more formal items like sharp-shouldered jackets and furry dresses were also in the mix. Lii also revisited mermaid-train skirts, a recurring silhouette from his prior work, although exaggerated for this collection.

Then after a brief intermission, the audience moved a floor down to see the couture. A deranged Barbie opened the show to invite people to view her closet and then revealed that she had a host of otherworldly creatures in a modified Chinese zodiac under her control. Instead of the standard sequence of animals, Lii had models walk out in pieces that were in the shape of a fly, praying mantis, panda, bear, clown, unicorn, sphinx, rabbit, Chinese lion and dragon.

The choices represented a blurring of all categories, including gender, culture and borders. The seahorse he liked because of its ability to reproduce asexually, while the praying mantis was chosen because of the way females cannibalize the male after mating.

“It’s a Western dragon because the Chinese dragon usually has whiskers,” Lii added. “The dragon in the West usually is a bad character or an aggressive one, but in China it’s a positive symbol. So this dragon can represent both sides and cultures.”

Two models came out together wearing round balls of organza, which Lii said symbolized unborn potential. They would be able to morph into anything they want, like a Pokeball about to capture the next unsuspecting creature.

The collection was superhuman in its proportions. The gowns, enormous layered piles of organza in electro-pop colors, needed so much material to make that Lii said it felt like landscaping because he was shearing them 3D. Oversize, chunky sneaker heels made the models tower far past six feet.

Next month, he plans to release a CGI-enhanced film of the collections that brings the universe further to life. He only plans to do one couture collection a year, but from season to season he intends there to be a through line.

“It’s like ‘Black Mirror.’ Each episode is its own story but underlying it there’s a very strong connecting force,” he said.