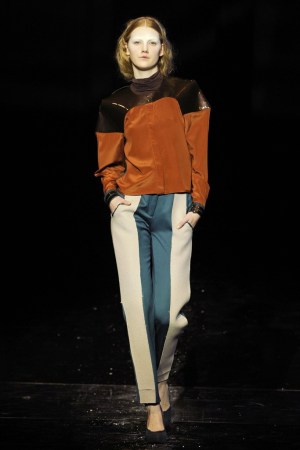 Other happenings during the fashion-packed five-day event, which ended on Sunday, included a cocktail for a traveling exhibition by photographer duo Peter Farago and Ingela Klemetz Farago titled “Northern Women in Chanel,” held at Designmuseum Danmark.

Reflecting the overall economic challenges of the region, Peter Fenger Selchau, chief executive officer of CPH Vision and Terminal-2, said, “In these times, we have to focus on the quality of the buyers instead of the quantity. With that in mind, yes, there’s lower traffic at the fairs compared to earlier seasons like 2008, but the exhibitors [at the fairs] indicate that buyers are ready to invest in new brands and the optimism is in general increasing among exhibitors and buyers.”

The turnout at Terminal-2 was flat, while CPH Vision saw a 5 percent uptick in visitors from the February 2011 edition.

The fairs saw a 50 percent leap in Japanese visitors.

Gallery ceo Christian Gregersen said a wider spread of retailers compensated for a lower head count per store, with buyers also shortening the length of their trips.

Mikael Diep, who is on the sales team of Surface to Air, which showed at Gallery, said: “Lots of stores in Sweden are struggling. It’s a particularly tough market to penetrate, as there are so many Swedish brands out there. It’s difficult to get buyers to take on a new brand for their store, especially when there are customs taxes and shipping costs to factor in.”

Nonetheless, Scandinavia has become the brand’s third biggest market after France and the U.S., Diep said.

The most upbeat labels and retailers were those specializing in tight, quality collections reflecting a unique point of view. And ambitions were scaled back amid a mostly dreary retail environment in Scandinavia.

“We only do what we feel we do best,” said Therese Lilja, co-founder of Svensson, whose line had evolved to include textured medium-heavy knits plus a couple of new shoe styles, such as a Chelsea boot and an oxford shoe.

“Growth is not a criteria for success; you can lose yourself in growth,” said Rasmus Bak, co-founder of rising Danish label Libertine-Libertine, which has its roots in surf and skate culture.

Bak spoke of a new movement of independent boutiques in Denmark, such as Wardrobe 19 and Kask, offering a more intimate experience than established local multibrand stores like Wood Wood and Norse Projects. “They’re really focused, concentrating on a certain vibe, speaking to a like-minded family of customers — some great small projects have come out of this [difficult economic period],” said Bak. “Everyone has always tried to communicate to the masses, this offers a different perspective.”

Founded by designers Sabine Niemann and Milla Villhoth, Kask started out in basement digs in one of the more underground parts of the city. During fashion week, Kask opened a store on Copenhagen’s trendy Pilestraede, next to the new Acne store. Kask specializes in Scandinavian designers, with the owners’ own fashion line, Villmann, soon be added.

Villhoth’s ones to watch include Sweden’s Carin Wester; Danish designers Anne Sofie Madsen and Stine Riis, who was recently announced as the winner of the first annual international H&M Design Award, and Danish fashion-art collective Moon Spoon Saloon, whose playful black and white collection was inspired by the singer Prince.

Villhoth, who visited Gallery, said the fashion orientation was more classic this season, with graphic twists. “Fabrics were very much the focus, like silk, different wools and cashmere, with experimental materials mixed in,” she said. The androgynous look was also prevalent. Colorwise, blacks and grays were dominant, with pops of deep blue, mustard and orange.

“I feel like the ethnic theme is going to be big, such as Aztec or Moroccan-inspired prints. For color, we’ll maybe see the same color being worn top-to-toe and then a pop of color on the shoe or bag,” said Catherine Eriksen, a stylist for MagMaLou in Oslo, which offers a makeover service. Eriksen especially liked androgynous looks by Avelon, such as mannish coats and biker jackets over maxiskirts. Into its fourth season, the Dutch brand is partly owned by Viktor & Rolf’s former head designer for women’s wear, Erik Frenken.

Rimi Sato, a merchandiser for Nojess in Tokyo, liked the accessories on offer, such as Epice’s scarves “with their lovely smoky colors” and Cornelia Webb’s body jewelry. Sato had come to Copenhagen to scout lesser-known brands.

“It’s important to continually surprise the customer, to raise their morale,” she said.

At the Terminal-2 trade show, which is more streetwear and denim oriented, Penny Armstrong, a buyer for soon-to-be-launched British men’s e-tailer Influence, said she’d seen lots of “fresh” takes on Aztec and Fair Isle trends, with a lot of textured fabrics with flecks and slubs. She liked Humor and Voi’s collections. “There were a lot of pastels coming through on jackets as well as jersey,” she said.

The heritage trend is losing steam, meanwhile, with many sensing a big shift in direction is coming. “I feel like it’s going to start cleaning up, maybe get a bit more utilitarian. The shapes will be similar but jackets are going to get a bit longer, with concealed fastenings,” said Andrew Grant, men’s wear design controller for River Island, who mentioned Britain’s You Must Create (YMC) among the brands to watch. In terms of colors, orange and browns seem to be coming through and black is having a bit of emergence, he said. “Going forward, black is going to be back.”

Coming off of a “very tough” season for outerwear, with the bottoms market saturated with chinos, Grant predicts shirts will be the star category for fall. “With the economy as it is, everyone has to find ways of making things look new to entice the customer,” he said. “There has to be a reason to buy.”