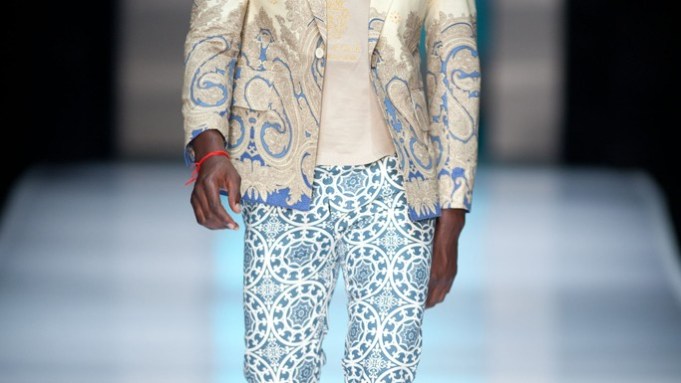 JOHANNESBURG — March was a busy month for African fashion, with no less than three competing fashion weeks being staged one after the other, each one vying to be the only fashion week on the continent that really matters.

Mercedes-Benz will also lend its name to the Cape Town and Africa Fashion Week events, slated for July and October this year, respectively.

No sooner had Mercedes-Benz Fashion Week Joburg ended than another fashion week was staged, this time in Lagos, Nigeria. Bannered as Arise Magazine Fashion Week, the Lagos event, now in its second year, is essentially the runway platform of Arise Magazine, an internationally distributed, edgy publication celebrating all things African and chic, with editorial headquarters in London. Helen Jennings, the editor, is also the author of “New African Fashion,” a book about contemporary African style.

The man behind Arise, Nigerian tycoon Nduka Obaigbena, is a controversial figure in African fashion. Interestingly, Arise and AFI had combined forces in 2009 to launch Arise Africa Fashion Week in Johannesburg, with much fanfare. R&B superstar R. Kelly headlined the first Arise Africa Fashion Awards in a glitzy ceremony at the Sandton Convention Centre in Johannesburg. The best collections were then showcased at the Paris and New York Fashion Weeks in 2009 and February 2010.

The union between Obaigbena and Moloi-Motsepe did not last, and with lawsuits flying all over the place, both parties decline to comment on the matter. Undeterred, Obaigbena set up the Lagos events and staged the annual Arise Africa Fashion Collective in New York last September, after an absence of 18 months and persistent rumors that suppliers have yet to be paid.

While Johannesburg or Cape Town may seem much more fashionable than Lagos, the Nigerian event positions itself as a pan-African fashion week, and seems to attract designers from across the continent and from the African diaspora who garner media attention overseas.

A Google search indicated that Arise Magazine Fashion Week in Lagos made more waves in the international media. Maybe the presence of model Alek Wek and British men’s wear designer Ozwald Boateng helped — his show was the event’s finale.

Toiling quietly away, oblivious to the catfights and intrigues between Africa Fashion Week and Arise Magazine Fashion Week is the veteran designer showcase in Africa, the just concluded South Africa Fashion Week Summer Collections. Now on its 16th year, the event was conceived by former model Lucilla Booyzen.

She has used SA Fashion Week as a platform for launching or nurturing the careers of South African designers, many of whom have become established names in the industry, such as Jacques van der Watt of Black Coffee, Ephymol, Christopher Strong, Clive Rundle, House of Ole, Nkhensani Nkosi of Stoned Cherrie, and Rajah and Kluk CDGT. More than seeking glamorous sponsors to headline the event, Booyzen has instead concentrated on creating retail partnerships throughout South Africa in order to showcase local designers and their collections to a greater public within their home country.

Last year saw the launch of the SA Fashion Week Designers Capsule Collections at the Melrose Arch flagship of national chain Edgars. Booyzen noted that Edgars has now expanded the concept to include three other flagships in key cities: Cavendish Square in Cape Town, Gateway in Durban and, come April, Sandton City in the upscale Johannesburg suburb of Sandton.

“What it shows me is that consumers identify with South African design very strongly. There is a definite demand for it, and Edgars has responded by increasing distribution to three other stores,” she said. “It’s great for the designers, who will have to step up their production to meet growing demand, and it’s great for Edgars, who were surprised and encouraged at how big the turnover was.”

Perhaps not wanting to be left out, AFI has forged its own retail partnership with another fashion chain, Foschini. The AFI Fastrack program is a national development platform that aims to develop and nurture Africa’s young design talent, and winners get an internship with Foschini.

“We want more of our designers to achieve success in their careers, which means giving them the necessary skills to run a profitable fashion business,” said Moloi-Motsepe. “When our designers succeed, the entire industry benefits and thus more jobs are created.”