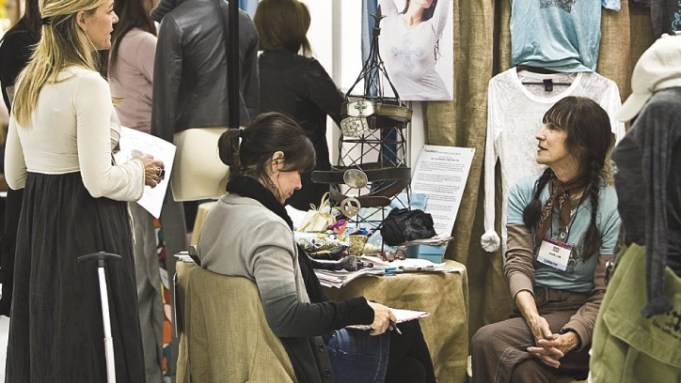 ATLANTA — AmericasMart officials hope a recent executive change and a renewed commitment to buyers’ market experience will position the show for growth once the economy bounces back. In the meantime, officials are offering retailers more incentives to shop in Atlanta, including expanding the show to a fiveday, Thursday-to-Monday format, providing educational business seminars during market and offering additional show perks. “We’ve got to bring the energy back,” said Lori Kisner, senior vice president of apparel. “I don’t think anyone [at AmericasMart] is planning on growth this year from a leasing perspective. We’re holding our own, but right now our focus is directed at getting more retailers into this building. Returning to a five-day format is the first step.” Kisner was hired in March after working as an executive at Surf Expo for 20 years. During the upcoming August edition (which runs Aug. 20 to 24 for permanent exhibitors and Aug. 21 to 24 for temporaries) AmericasMart will once again emphasize its social occasion categories, touting itself as the nation’s largest prom market.

In sportswear and dresses, Kisner said immediates are selling best and also noted buzz in the accessories market. “Accessories are hot. Companies have been approaching us… and telling us they want to open [accessories] showrooms or bring their product [to AmericasMart],” she said. To this end, the mart is opening four new accessories showrooms on Floor 12 this summer. It’s also relocating its runway fashion shows held every market Saturday from the 15th floor theater to the large, open area in the atrium, so that attendees can look down and see the show from all parts of the building. The mart also plans to hold multiple category-specific fashion shows throughout market days. In addition to aesthetic appeal, officials aim to offer show attendees business solutions and educational information with the launch of AmericasMart University, a series of business classes and seminars taught by industry experts.

Originally started as a business tool for gift and home market buyers, the program is now available for apparel retailers. Buyers can register for one-hour classes designed to provide competitive tools and techniques, as well as trend and product ideas. All courses are free to retailers. From a marketing perspective, mart officials said they’re bulking up their direct-mail campaign and working harder on “data cleansing,” making sure certain retailers are receiving the most relevant information for their businesses. And as recession-weary retailers continue to cut back on trade show attendance, the mart is taking measures to m arket Atlanta as an affordable option with all the amenities of a true metropolis.

Kisner noted a surge in elegant dining options downtown near AmericasMart and said the cost of hotels, taxis and entertainment is much less in Atlanta compared with cities like New York. “The Southeast is the fastest growing region in the U.S. and Atlanta is the fastest growing city in that region. Now all we need is the critical mass [from show attendees] to support that,” Kisner said. Additional incentives such as an herbal water bar, free parking and meals, on-site spa treatments and parties are chief among the perks AmericasMart will offer its buyers in hopes of drumming up market excitement and attendance.

MIAMI — Swimwear will dominate Miami’s trade show and runway calendar for the rest of the year. Kicking off the season is the Mercedes-Benz Fashion Week Swim show, which runs July 15 to 19 at The Raleigh Hotel in South Beach. In its fifth year, the IMG Fashion sponsored event will take to the tents with runway looks by 18 designers, including returning lines Tibi, Red Carter and True Religion Swim, and new participants like L*Space by Monica Wise, White Sands Australia and Marysia Swim. “We are proud to welcome so many new designers to our roster this year,” said Fern Mallis, senior vice president of IMG Fashion.

“This season’s lineup continues to bring to the market the quality and ingenuity that people now expect from this show.” While some recession-conscious designers have pared down recent runway shows, officials at IMG Fashion say they aren’t feeling as much pressure to cut costs. “We’re still going all out this year,” said Mallis. “With a swim [runway] show, you don’t need a lot of props. A pretty model wearing a swimsuit is enough.” Swim Show, a trade show sponsored by the Swimwear Association of Florida, will be held at the Miami Beach Convention Center from July 18 to 21, overlapping with Mercedes-Benz Fashion Week. In its 27th year, the annual show is expected to draw about 2,000 U.S. and international buyers who will view almost 2,000 lines, according to show organizers.

New exhibitors this year include Apple Bottoms, Puma, Salt and Tigerlily. Children’s swimwear will also have a strong presence from lines like Ed Hardy Kids and Lemons & Limes Kids. As reported, Trafik, the contemporary trade show held biannually in South Beach, is folding after five years in business. Organizers said they closed the show after its final edition in March due to the economic climate. Trafik typically showed about 300 brands, with past exhibitors including Ed Hardy, Ben Sherman, Miss Sixty and Joe’s Jeans. Hoping to reel in some of the now defunct Trafik’s contemporary business is Florida Fashion Focus, a mostly misses’ apparel and accessories trade show held five times a year in Fort Lauderdale.

With a new name, Trendz, and a new location — the Palm Beach County Convention Center in Palm Beach, Fla. — the show will run four times a year beginning with its Oct. 30 to Nov. 2 market. Officials said about 3,000 apparel, accessories and shoes exhibitors will be represented. The revamped event, organized by Southeast Apparel Exhibitors, Inc., a Miami-based group of about 200 sales representatives, is expected to bring in Florida buyers who may not be willing to travel to New York or Los Angeles more than twice a year. “Many of our Florida customers are not traveling out of state as much because of the expense. Now the hottest trends will come to them,” said a Trendz spokesperson.

The last installment of the Focus on Fashion incarnation will be held Aug. 8 to 10 at the Broward County Convention Center in Fort Lauderdale, Fla., and will showcase almost 550 lines such as Alberto Makali, Komarov, XCVI and Simon Chang. Accessories lines including Tolani and Mary Frances Accessories get a big push for the August show, as do swimwear brands such as Calvin Klein, Nicole Miller and Longitude.