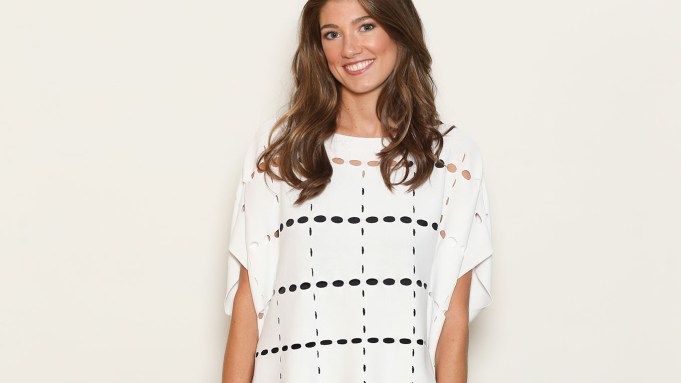 Andrea Jovine, a well-regarded bridge sportswear designer in the Nineties, is making a comeback.

Jovine teamed with Nation Design, a New York-based manufacturer, to produce a collection of fall knitwear that is being shipped to some 400 to 500 specialty stores in the U.S. The spring line, which is being shown this week at Stitch @ Project in Las Vegas and will be introduced next week at the New York showroom, is being expanded to department stores.

“I’ve known Andrea a long time. She’s focused most of her time on interiors. She’s always wanted to get back into it,” said Lynne Ronon, chief executive officer of Nation Design, in an interview at company headquarters.

Jovine explained, “When we left, it was under circumstances that were not really planned, we had closed when Victor [Coopersmith, her husband and business partner] passed away and I segued into interior design so I could stay home and raise my son. Sometimes it’s in your blood and hard to get rid of. I always imagined I would go back into fashion at some point. I had to find the right scenario.”

Jovine closed her sportswear business in 1999 and dabbled with other licensing ventures but then began designing interiors for homes in Greenwich, Conn.; New York; Westchester County in New York; California, and Colorado, which she plans to continue. “Everything is related. It’s all the same principles. I like both,” she said about fashion and interior design. Jovine said she has known Ronon since her days at Saks Fifth Avenue. “I think we’re of the same mind-set,” said Jovine.

Jovine’s design aesthetic has remained basically the same since her heyday designing sportswear. “Honestly, I don’t think it’s changed much. I try to do value, really good price points for modern dressing, always keeping comfort in mind,” she said. She also felt strongly about inclusive sizing and versatility. “Knitwear has always been my handle. I thought there was a nice void for me to reenter using the same philosophy I’ve always had,” she said.

The collection features easy knit dressing that can take the woman from the office to casual weekends. “From a consumer point of view, I’m always looking for great sweaters you can put on and go anywhere,” she said. She worked closely with the Nation Design team and spent a lot of time in their New York headquarters.

“That’s why I reentered. It seemed like a perfect collaboration with Nation, and they were very receptive for me having the creative control. As you know with licensees, they can be structured in many ways. The key to a successful license, especially if somebody has a name, is you really want to express the DNA of the brand, and they’re very loyal to that which is great,” said Jovine.

Jovine said she has plans to eventually expand to other categories with Nation Design.

“The key was to be very strategic to how we built the brand and going back to exactly what was really the core of our business. Great knitwear has always been that. We started where we saw the white space, which was great price points and great sweaters, and we’ll just continue to add on. Ultimately I’d like to do a little bit of everything like the old days,” she said.

Obviously, since Jovine left, the fashion industry has changed dramatically. She said she’s been following the industry more from a consumer perspective, with the off-price boom, the challenges at department stores and the business going online. Eventually, they plan to add e-commerce.

The designer said she plans to promote the collection with appearances at stores. “Some of my favorite times back in the day was working on the floor with the customer. I love hearing the feedback,” she said.

Describing the aesthetic of the knits, Jovine said shapes were very important. “Some are sexy shapes, T-shapes, with a lot of detailing that harken back to things I was known for, a lot of ruching, ties, wraps. There’s something that’s a little special about them. When the shapes are simple, there’s always something interesting about them, like the mixing of textured stitches. For spring, we have a lot of open work, like transparent and sheer. Even when it’s a solid, there’s always some novelty in it, whether it’s a texture, or an insert, or some kind of geometric patterning in a textural vein.”

“We wanted to keep it at accessible price points, but modern with new yarns,” said Ronon, who declined to give a first-year volume projection. She said she had a professional road sales force selling the line. “Specialty stores are looking for something new that services this category,” said Ronon. She said the knitwear, which is manufactured in China, is all washable.

Jovine, who graduated from the Fashion Institute of Technology, originally launched her label at 24 years old and was known for her wool jersey separates. At its peak, the company was generating about $75 million in wholesale volume and was a solid resource at stores such as Saks Fifth Avenue, Bloomingdale’s, Lord & Taylor and Dillard’s. The company dissolved in August 1998, after 15 years in business, due to financial problems stemming from the fallout of the bridge market and problems with chargebacks. Her husband, Victor Coopersmith, was chairman and chief executive officer of Coopersmith Enterprises, which owned Jovine’s business. He died at age 51 while swimming in Lake Powell, Ariz., on Sept. 9, 1998. International Women’s Apparel, a division of Hartmarx Co., lured her back and the bridge designer briefly launched a collection for fall 2003.

Nation Design is a design and sourcing platform for licensed and proprietary brands, which are sold through direct-to-consumer sites, TV shopping and retail stores.