A Look Into the Fashion World of Animal Crossing

The Nintendo Switch title that launched in March at the start of the pandemic, quickly became popular among millions of gamers looking to pass the time and try to live a normal life, albeit virtually.

Animal Crossing: New Horizons, the fifth title in the series, takes the player to a deserted island that they can then build from the ground up. Like previous titles, players can interact with anthropomorphic characters that move to the island and then play and share with real friends via the internet.

In recent months, brands and fashion designers have added their designs to the games with partners that are familiar with the Animal Crossing series that made its debut in Japan in 2001.

Marc Jacobs and Valentino partnered with photographer Kara Chung, who is also behind Instagram page @AnimalCrossingFashionArchive, to re-create Marc Jacobs looks in-game and the Valentino pre-fall 2020 collection. Anna Sui and Dolls Kill added select looks in the game and Highsnobiety and Hypebeast also took part in the fun. On Tuesday, Italian streetwear brand GCDS partnered with Crossing the Runway to release a capsule collection for players in the game. Players can scan a QR code to download and outfit their in-game characters with a black GCDS logo sweater, faux-fur hat or faux-fur coach.

See Also: The Next ‘League of Legends’ Champions Will Wear Louis Vuitton

Before designers had their looks re-created in-game, players did so themselves. Chung created digital ensembles with brands such as Chanel, Gucci, Saint Laurent, Off-White, Human Made, Acne Studios, Noah, Maison Kitsuné and Patagonia to name a few. Crossing the Runway over the years re-created ensembles from Prada, Céline, Calvin Klein, and in 2016 did mock ad campaigns for Louis Vuitton, Dior, Jil Sander, JW Anderson, Raf Simons, Vetements and Jacquemus.

Instagram page @NookStreetMarket, whose name is a combination of Dover Street Market and Tom Nook, the raccoon or “tanuki” animal in the game, takes requests and showcases looks on its page.

H&M, Moschino and Asos released outfits for The Sims series and graphic designers imagined their Sims characters in Marine Serre, Telfar and LaQuan Smith, but this marks the first time designers are meeting Animal Crossing players half way. 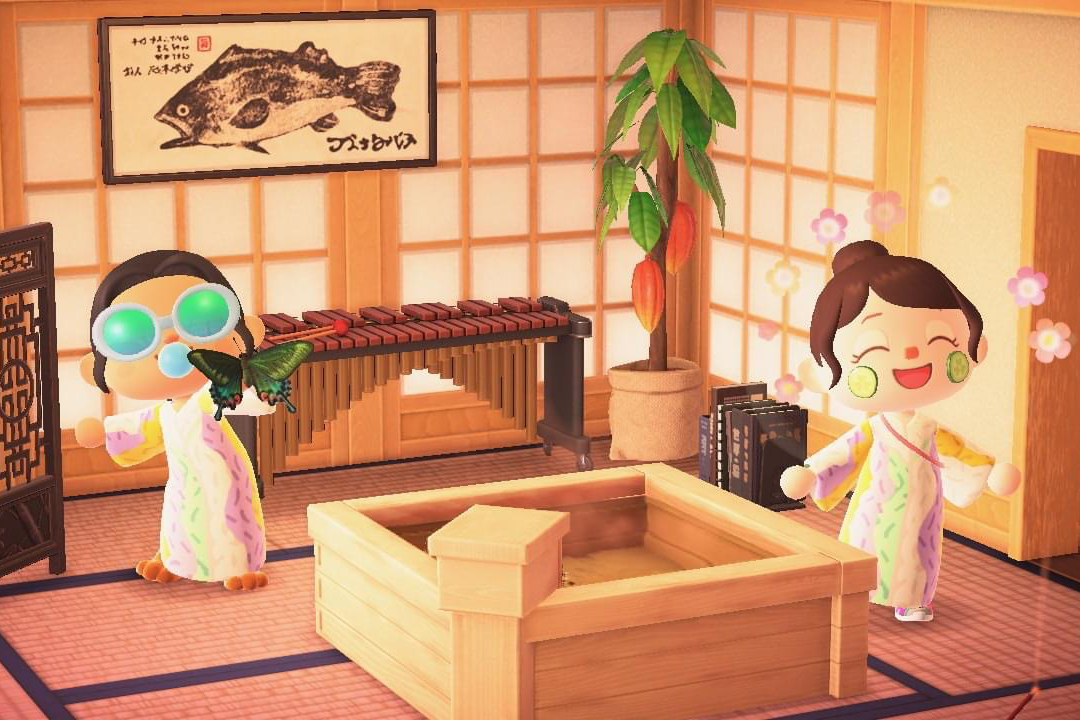 “I’ve always been interested in semi real-life simulation games,” said Liang. “For example, I love The Sims on PC and Pokemon on Nintendo Switch. I feel like Animal Crossing is another version of that.”

Liang said Rubin approached her with the idea of opening a pop-up in-game. “I wanted to do something fun with Sandy, and support her as a friend because I know this is a tough time to be a small business owner,” Rubin said. “I thought launching a collection, hosting an event, shooting a lookbook, doing the things she normally does — even in a virtual space — could bring a sense of normalcy to our lives, which have been so shaken up.”

Rubin added that she grew interested in Animal Crossing because of the fashion in the game.” I hadn’t played the previous versions. I had seen a lot of funny and creative Animal Crossing content on TikTok, so I had gotten pretty familiar with it anyway. I had seen accounts like Animal Crossing Fashion Archive creating elaborate outfits for their cute little characters and wanted to see if I could do the same. I started recreating rare and iconic vintage runway looks, and then did a small group of Sandy fleeces as a surprise for her.”

Rubin took matters in her own hands, but Marc Jacobs, Valentino and GCDS turned to experts who have a huge collection of designs circulating the web.

Richmond Young and Shel Orock, the duo behind Crossing the Runway, had been re-creating designer looks in Animal Crossing since 2014 with series titles Animal Crossing: New Leaf and Animal Crossing: City Folk. They have shared numerous looks on their Tumblr page that amassed extra 1,000 followers due to the popularity of the latest title and eventually caught the attention of GCDS.

“GCDS has built over the year an incredible community that comprehends a large spectrum of demographics. We love to extend the limits of GCDS into the digital world,” said GCDS creative director Giuliano Calza. “The game is an adventure like old Nintendo games of Pokémon or all my childhood favorites. The cool thing is you can interact and personalize your avatar as much as you want. This individualism is key for GCDS, so it makes sense for me to get in the play in full GCDS. I’m personally obsessed with the game and it’s just the perfect fit with our branding.”

Richmond said their hobby came from an idea of having their in-game characters wear the Prada spring 2014 collection while planting flowers, cutting trees, fishing, running errands and doing other game tasks. “That was the collection that people were saying is the most Instragrammed collection ever. It was very graphic and recognizable,” he said.

“Frankly a lot of people appreciate the iconic fashion we do,” Shel said. “Balenciaga 2008 is currently on our docket. We have a few other things we’re preparing to serve up as well for smaller brands, too. We’re trying to find a balance between doing current stuff and bring back the previous stuff.”

But what benefit does Animal Crossing bring to designers in the long-term? The day will come when the lockdown ends, lives will return to normal and people will be able to express themselves through fashion again.

“I think Animal Crossing can be a powerful way for brands to engage with the customers who love them,” said Rubin. “In an era where so many companies feel they need to be a full lifestyle brand to have a lasting appeal, making themselves available in the virtual world is a unique new way to act on that impulse.”

How Burberry Is Diving Deeper Into Online Gaming

WATCH: Art in the Time of Coronavirus