By Rosemary Feitelberg and Bridget Foley on April 21, 2009
View Slideshow 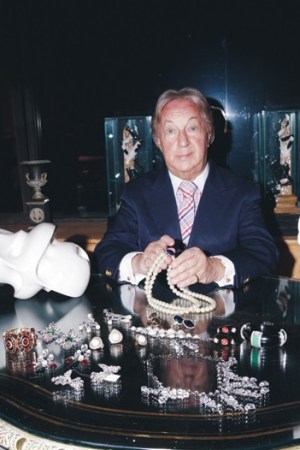 From where Arnold Scaasi sits, absolutely. But then Scaasi has dressed five First Ladies — six, if you add in Lady Bird Johnson, whom he puts in a separate category. In a recent phone call to WWD, Scaasi was eager to weigh in on Michelle Obama’s approach to fashion — while tossing his own name in as a hopeful contender.

This story first appeared in the April 21, 2009 issue of WWD. Subscribe Today.

Scaasi started with praise. In his view, Obama would make an ideal client, even if she weren’t First Lady. “She’s great-looking, she has a great personality and she’s obviously very bright,” he stressed. “But…” Scaasi finished the dreaded qualifier with, “something is amiss.”

Perhaps, he suggested, Obama is dressing much the same now as she did when she was merely the brilliant spouse of a dashing community activist in Chicago. Obama should “pick some designers and deal directly with them. Obviously, she doesn’t have the right advice at this moment,” Scaasi said. “As [the wife of] the head of the most important country in the world, you must dress at some points according to protocol,” he offered, while maintaining that still, “you don’t have to be conventional.”

“I think it is about looking right in the right situation,” Scaasi continued, “And certainly the coat-sweater with the Queen of England was absolutely wrong,” he noted of Obama’s now-famous black cardigan-and-dress ensemble. “[A jacket] would not take away from [Obama’s] good looks or from her personality; it would just photograph better, and it would be more proper for meeting the Queen.”

His own such relationships go way back, to Mamie Eisenhower, whom he first dressed in 1960, “then on to Jackie Kennedy before she went into the White House, as the Senator’s wife, and also after. And then, of course, Barbara Bush, who I still dress to this day, and Mrs. Clinton and Laura Bush. Is that the right order?”

Indeed it is, with one omission: “Somewhere in there was Lady Bird Johnson,” whom the designer views differently than the others precisely because he didn’t deal with her directly. Rather, President Lyndon Johnson would somehow happen upon a Scaasi design “and would tell his secretary, you know that wonderful girl from Texas, and he would say, ‘I like that for my wife.’ ”

Asked whose role it should be to ensure that proper wardrobe protocol is followed for various events, Scaasi suggested a divide-and-conquer approach, with the First Lady relying on a specific designer or designers, along with help within the White House. “I don’t know how much advice she’s getting from who or where,” he mused, “but for instance, she has a very good-looking social secretary, Desirée Rogers. She’s great-looking, and she dresses beautifully from the photographs I see, so why not discuss it with her? I think in making these gaffes, it makes it very difficult for the people [Obama] has to work with in her administration. Here’s an idiot designer like me calling you up and saying blah, blah, blah, but the press corps has to answer these questions.”

In other Scaasi news, the Museum of Fine Arts Boston thinks the designer has done something truly great — by donating more than 100 garments and selling his archives to the museum. By selling the archives for what is said to be a six-digit sum instead of donating them, which has been more the norm for designers of a certain age, Scaasi could be setting a precedent.

The museum’s new trove includes the see-through black tulle sequined ensemble Barbra Streisand wore to the 1969 Academy Awards, a black sequined spiral gown for Joan Crawford and a short gray flannel number for Brooke Astor. A donation by benefactors Jean and Frederick Scharf has allowed the MFA to buy drawings from more than 500 collections. The museum is also purchasing more than a half century of scrapbooks, video footage, photographs and press clips. Giving up Streisand’s outfit was the one piece that gave him pause. “I was afraid it would wind up in a vault somewhere, and it would never be seen,” he said.

This is the first time the MFA has secured a designer’s major collection. Scaasi’s work will be celebrated with a retrospective and coinciding publication at the museum in fall 2010.

But the gift-sale is by no means a step toward retirement. The designer will continue to dress select personal clients and will appear again on HSN May 5 to sell his costume jewelry collection.