The winners of the annual internship program are Alexander Oscar Kelvy and Grace Butterworth. 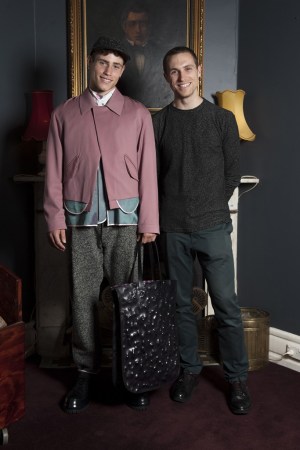 SYDNEY — In the wake of Monday’s hostage siege, Sydney was in no party mood this week. But the Australian Fashion Foundation pressed on with a scaled-down version of its annual pre-Christmas event on Thursday evening to reveal its 2015 internship grants.

Around 40 people convened at the Lord Dudley Hotel in Woollahra to see Royal Melbourne Institute of Technology fashion graduates Grace Butterworth and Alexander Oscar Kelvy named the joint women’s wear and men’s wear recipients of 20,000 Australian dollars, or $16,309 at current exchange, each. The funds will go toward travel and living costs for two, six month international fashion internships to be facilitated by the foundation — one in New York, one in Europe. Another RMIT graduate, Max Sanderson, was named runnerup. The foundation was co-founded in 2009 by Malcolm Carfrae, now global head of communications at Ralph Lauren Corp., and Colac Pictures president Julie-Anne Quay to help emerging Australian fashion designers and creatives gain international experience. Previous winners have secured placements — and in more than one case, eventual jobs — with Calvin Klein, Alexander McQueen, Thom Browne, Proenza Schouler, VFiles and photographer Craig McDean.

The hostage siege — which claimed the lives of three people, including that of gunman Man Haron Monis and has prompted Australia’s largest spontaneous outpouring of public grief, with a sea of floral tributes still growing not far from the Lindt Chocolate Café siege location in Martin Place — was never far from conversation throughout the evening.

Organizers considered cancelling the event, as many other parties have been this week, including the first annual general meeting and Christmas party of new industry body, the Australian Fashion Chamber, which was due to take place on Monday night. “But all the young designers had already booked their plane tickets and were all so geared up to doing this, we couldn’t call and say it was not on” said Pilcher, an Australian Fashion Chamber non executive director.

“It’s very upsetting,” said Dion Lee of the siege. “We closed our city store [on Monday]. I think it’s impacted people, whether or not they’re shops or employees or friends. I think the ripple effect has been felt by everyone in Sydney.”