Sporting a more casual, downtown vibe than its big sister, Pierre Balmain is gunning for 700 doors in its first season. 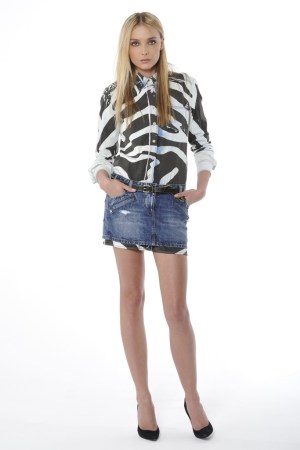 PARIS — Capitalizing on the heat attributed to its brand name, Balmain has big ambitions for its new second ready-to-wear line, produced under license by reborn Ittierre SpA and slated for early December delivery.

Sporting a more casual, downtown vibe than its big sister — and without the nosebleed price tags — Pierre Balmain is gunning for 700 doors in its first season, targeting Europe, the U.S., Middle East and Asia, and plans to open freestanding boutiques in Hong Kong, Milan, Paris and Rome before the end of the year. Retail prices are to range from 120 euros, or $172 at current exchange rates, for T-shirts up to 900 euros, or $1,291, for eveningwear.

The first collection, for spring 2012, spans a variety of women’s and men’s categories, including knitwear, tailoring and denim.

“We see Pierre Balmain as a new and distinct brand that is inspired by the successes and history of a great house, but offers a look and product that respond to the needs and desires of today’s marketplace,” Balmain chairman and chief executive officer Alain Hivelin told WWD. “We know that Ittierre, with its great expertise, experience and reliable quality, is the perfect partner for this new venture.

“Our goal is to position Pierre Balmain as a new global brand that will be established in all the key international markets,” he added.

Hivelin said the two collections remain part of the same brand universe, but with different outlooks.

Olivier Rousteing, who earlier this year succeeded Christophe Decarnin as Balmain’s head designer, will make the “quintessentially Parisian” main collection “even more sophisticated and couture-like — without, of course, renouncing that ‘roc’ aesthetic that has been so important for us these the last few years,” Hivelin explained. “The Pierre Balmain collection translates the codes of Balmain in a more casual and relaxed manner.”

He noted that Rousteing would concentrate exclusively on the Balmain label, while the new line will have its own separate design team.

Hivelin declined to give sales projections for the launch, but described large ambitions with “Pierre Balmain boutiques in all key international cities.”

The company plans to unveil a new Web site for the brand during Paris Fashion Week this fall, signaling a digital-based marketing strategy that will leverage social media.