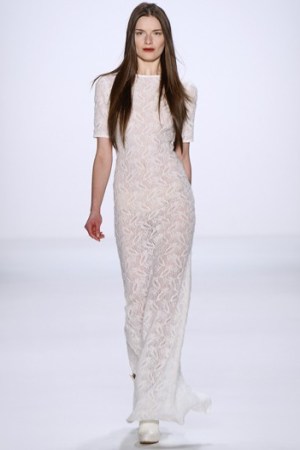 Marcel Ostertag: The collection contained variations on his signature paneled silk dresses, and he also added his own twist to next season’s transparent layers.

Michalsky: Michalsky sent out black and camel motocross looks – jackets and pants for men and women, and a bustier dress for the latter – were racy.

Esther Perbandt: The collection included a collaboration with Italian street art and abstract artist Marco Pho Grassi, who made a signature work for the line.

Kaviar Gauche: Duo Alexandra Fischer-Röhler and Johanna Kühl showed a collection packed with flattering, covetable pieces, each fit to a T – not always a given in Berlin.

Dawid Tomaszewski: This young designer’s second show at Berlin Fashion Week included silk bustier gowns and knits that were coiled, rather than cabled.

Escada Sport: The brand’s “Frozen Tales” fashion line-up for fall/winter had some commercial merchandise retailers could sink teeth into.

Rena Lange: ﻿In a season of Seventies revivals, Rena Lange accentuated the best of a decade often derided for its lack of taste.

Schumacher: Dorothee Schumacher’s collection was influenced by the idea of Bianca Jagger viewing the crazy-colorful Murakami exhibit at Versailles.

Hugo by Hugo Boss: The collection focused on its signature red and black as the fall collection took to the runway in Berlin’s Neue Nationalgalerie.

Kilian Kerner: The collection was brazen in color and style. Swarovski crystals were the main elements in the bow-festooned women’s line.

Perret Schaad: This collection was full of convincing and flattering daywear staples in a diverse palette, from an ivory silk sweatshirt to deep red jersey dresses.

C’est Tout: Katya Will’s first runway outing was strong on neo-genteel dresses, from tailored, belted styles to frothier ones in silk charmeuse and bowed in the back.