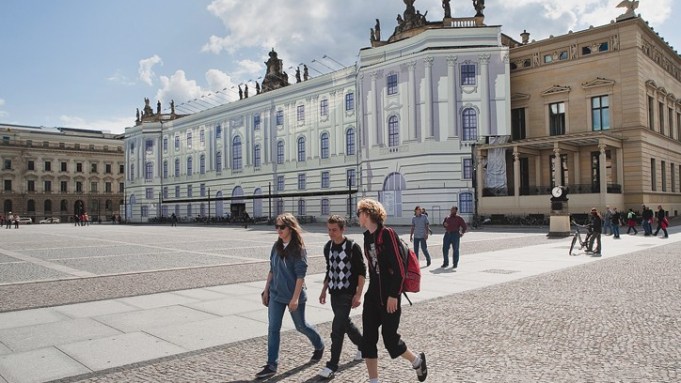 Berlin — and indeed, Germany — has never seen more runway and trade fair activity than is slated to take place here, starting Wednesday and running through Sunday.

A cadre of local, national and international brands, first timers, underground and upmarket stylemakers are converging on the capital city for what promises to be an energetic start to the spring 2010 season. Several shows have an eco-friendly focus. And if the projections are accurate, more than 70,000 trade visitors will be in Berlin to take part in the action. Here’s a round-up of Berlin’s main shows and events.

Mercedes-Benz Fashion Week Berlin, July 1-4
Gathering economic storm clouds and extremely early dates didn’t deter an ever-growing group of designers and fashion brands from taking to the MBFWB runways for spring. There are 37 official MBFWB shows and presentations planned in the tent on Bebelplatz and assorted city venues during this fifth round of Berlin runway shows, compared with 24 last January. And the roster features an improved blend of young talents and more tried-and-true designers from near and far.

Bread & Butter Berlin, July 1-3
Bread & Butter is coming home to spectacular new digs in Berlin: the Thirties landmark airport Tempelhof. The eight-hangar set-up means the progressive trade show for denim, streetwear, urbanwear and casual fashion will be more compact, with about 550 exhibitors compared with about 800 at the Barcelona edition. But B&B’s organizers are promising a more focused and retail-oriented overview, with each hangar conceived like a store. The lineup includes Sport & Street, Street Fashion, Fashion Now, Style Society, The Source, Denim Base, Urban Superior Men and Women, and L.O.C.K, or Labels of Common Kin, such as those featured in B&B founder Karl-Heinz Müller’s Berlin fashion store, 14 oz. Also on hand: B&B’s Luna Park, a business club, beer garden and exhibits focusing on Tempelhof, “the mother of all airports.”

Premium, July 1-3
In its 14th season, Premium aims to be a full-service marketplace for the premium retail segment. The expo will present about 900 international men’s and women’s apparel and accessory brands, ranging from casual to chic, sophisticated to street sharp. For spring, Premium is intensifying its focus on ecological and sustainable fashion, not only in terms of its exhibitor mix but through workshops and symposiums curated by the sustainability strategist Made-By. In addition, a new Web Mobile section will provide retailers and manufacturers links to specialists in Internet design, technology and applications.

Boudoir, July 1-2
High-end lingerie takes the spotlight at the new Boudoir fair. About 30 niche brands, including Der Kommissar, French Cancan and Mademoiselle Fred, are expected to show their finest scanties, joined by beauty items from Fragonard and Art of Shaving, among others. The show takes place at the aptly named Delight Studios, often used for photo shoots, and the presentation is designed to be more “warm concept store” than “harshly lit trade show.” Instead of a catwalk, expect a dance performance and an exhibition of intimates designed for iconic doll Barbie, who turned 50 this year.

GREENshowroom, July 1-4
Luxury in green is the goal of GREENshowroom, founded by designers Magdalena Schaffrin and Jana Keller. About 20 brands will show sustainable women’s and men’s wear, beauty items, accessories and gourmet food across several suites at the historic Hotel Adlon Kempinski, steps away from the Brandenburg Gate. Displays will take advantage of the hotel facilities, utilizing beds and bathrooms for the presentation of lines including Blushless, Roshanak Salim, Dr. Hauschka, Julia Starp and Les Ettes. GREENshowroom will also host a salon show with live classical music and a dance performance. The trade show moves on to Paris in October.

Thekey.to, July 1-4
Eco-lifestyle is the focus of a new show called Thekey.to. The green trade show will operate out of the stately Kaiserliches Postamt in Neukölln and will present around 100 fashion, streetwear and sportswear labels, including Van Markoviec, Pamoyo, Slowmo and kkfork — Kilian Kerner for Komodo — plus beauty and health products. And it’s not just the clothes that will be ethically made — all stands and displays will be completely recyclable. The venue is scheduled to stay open longer than Premium and Bread & Butter, to allow buyers a few extra hours to order. Also on offer: “slow food” tastings, fashion shows, workshops and parties.

5 elements.berlin, July 1-3
The new trade show 5 elements.berlin brings together intimate, beach, spa and fitness apparel, cosmetics and accessories at the Palais am Funkturm, located in Berlin’s old fairgrounds. The varied exhibitor list includes La Perla, Speedo, Marlies Dekkers and John Galliano as well as Korres body care and Juliette Has a Gun fragrances. The organizers hope to draw visitors with a cross-segment lifestyle approach — including relaxation lounges and healthy food stands — all with an accent on intimate. There also will be special events, such as a runway show to fete lingerie brand Hanro of Switzerland’s 125th anniversary.

Projekt Galerie, July 1-3
Held in two art galleries along the grittily urban Torstrasse, Projekt Galerie presents alternative designers and avant-garde labels in an artsy setting. With about 30 brands, the trade show is much smaller than fashion week’s main events, but it bills itself as a progressive, cutting-edge alternative to the bigger shows.

Wedding Dress, July 4-5
The fourth edition of Wedding Dress is probably more street festival than trade event, with an outdoor fashion market, exhibitions and live music. Spread along 1,640 feet, the show features more than 180 young designers and new Berlin labels, some of which can be bought on the spot. The main focus is young urban fashion and alternative streetwear. Between 3 and 4 p.m. on July 4, the fashion show “common people” will present the 20 most interesting styles discovered on the streets of Berlin.

Showroom-Meile, July 1-4
Under the motto “Are you beautiful enough?” Showroom-Meile describes itself as an open-air fashion, art and entertainment vernissage. The event, in its third edition, showcases more than 50 designers in around 30 stores and galleries throughout the city center. It also includes cultural shows such as a photography exhibition of fashion in the Kennedy and Obama administrations entitled, “Put a little style into the White House,” at the Museum The Kennedys opposite the Brandenburg Gate.