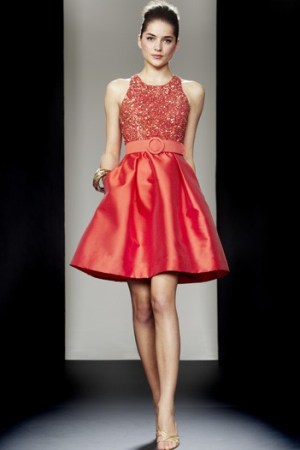 DALLAS — Wedding bells will ring Sept. 11 at the Dallas Market Center when it kicks off the first Dallas Bridal Show in conjunction with a home and gift market.

The three-day bridal event will spotlight gowns, as well as bridesmaid, quinceañera, prom, eveningwear, accessories, stationery, tabletop and gifts. It will be situated in booths on the 13th floor of the World Trade Center, as well as permanent showrooms for bridal and prom on the 14th floor.

FashionCenterDallas occupies floors seven, eight and 12 to 15 of the Trade Center, which showcases home furnishings, gifts and fine jewelry on other floors.

“We opened the bridal and prom neighborhood on 14 in 2008 and it has grown faster than we expected,” said Cindy Morris, chief operating officer of the DMC. “It is leased to capacity, and we’ve had a lot of retailers from the West Coast and out of our territory come to shop bridal.”

The Dallas Bridal Show was conceived and timed at the request of key bridal exhibitors who wanted to exhibit in September instead of during the customary apparel shows in August and October, she said. The coincidence with the gift market is intended to spur crossover buying.

Permanent rooms house about 60 bridal lines, and an additional 240 resources are expected to show in 10,000 square feet of temporary booths, including Watters & Watters, Emerald Couturier and Sincerity Bridal. Some sales representatives who show social occasion lines on the 15th floor will lease space on 13 to present them with the Bridal Show, including Brad Hughes & Associates.

The DMC is marketing the event to 800 bridal retailers nationwide.

The market center is also planning another niche event: the Dallas Dance Show, Jan. 27 to 30.

“Our location is in the middle of the retail base for dance, which is primarily in the South, Southeast and Northeast,” said Morris. “We are targeting 250 stores that do the majority of the dance business.”

The goal is to showcase 50 to 75 vendors of clothing, shoes and accessories in booths in the lobby of the Trade Mart, which is called the Grand Pavilion.

“When you look at the opportunity within this business, there really is not a show for them in this part of the country,” she said. “We’ve got a great space to do it and have the retail buying base here, so it will be more cost effective for them.”

Within FashionCenterDallas, the DMC is focused on building buyer attendance and exhibitors. It promotes itself through Facebook, where it has around 1,500 fans, and Twitter, by highlighting news, products and events.

Buyer registration grew year-over-year for each of the past six markets, including significant gains from the Midwest, Morris noted. About 10 percent of buyers were new to the venue, she added.

“We’ve seen more and more retailers that have gone to New York in the past are coming to Dallas instead,” she claimed. “They don’t see the necessity to make that extra trip.”

Dallas is a travel bargain. Rooms near the DMC can be had for as little as $69 and full-blown luxury at the Ritz-Carlton is $199 a night when booked through Market Travel, an in-house agency.

On the exhibitor side, the DMC expects continued growth in the young contemporary and fast-fashion category, which swelled 30 percent in the past year to 200 booths in the temporary show on the 12th floor.

It also is focused on developing intimate apparel, loungewear, yoga clothing and upscale men’s products. FCD is known for its broad selection of contemporary, bridge, misses’ and denim apparel, as well as shoes.

“Economically, we are better positioned than any market in the U.S.,” said Morris. “It seems like things have firmed up in Texas in the last couple of months and there is a recovery under way.”