The fall 2013 collections look bright and breezy, like the city’s all-year-round tropical climate that’s especially sunny in the drier seasons. 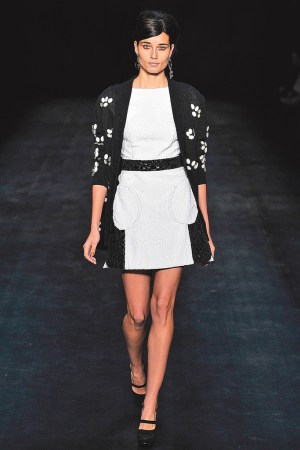 Also bright is the opportunity for international labels, as the nation is importing more clothing than it is exporting, according to government figures.

Designers at Fashion Rio sprinkled the traditional dark-colored lineup of jeans and winter clothes with glowing shades of orange, yellow and red. Apart from denim, which was present in almost every collection, fabrics were on the lighter side, with linens, silks, lace and organza dominating the runway. Soft knits and leather appeared here and there for a more polished look.

Cariocas, as Rio residents are known, take advantage of slightly cooler temperatures in the fall and winter months of March through September to wear more structured and sophisticated pieces. That’s the time of year when flowing summer dresses, tank tops, shorts and beachwear give way to jackets, pencil skirts, blouses and shirtdresses with long sleeves — pieces that were on display at Rio’s main runway fashion week, which wrapped up its 22nd edition last month.

The event, held since 2009 at Rio’s Pier Mauá, where cruise ships dock alongside the old downtown area, was shorter and smaller this season, with fewer designers and fewer models on the runways. It marked a decisive adjustment to Brazil’s fashion calendar to align it with the international agenda: The fall fashion week was pushed up to November from January, and the spring shows were moved to May from June. The changes led to a reduced lineup of 17 designers showing smaller collections in three days, instead of the traditional five days showcasing at least 25 labels. Sales at the business fair that ran concurrently were stable.

But the weaker event, with a slight air of improvisation, was just a transition for the better, said Graça Cabral, institutional relations director at Grupo Luminosidade, organizer of the São Paulo Fashion Week and Fashion Rio. The new schedule will make the Brazilian shows more relevant, globally, and will help reduce costs to final buyers starting in 2013, she said.

“The old schedule compressed the time between the presentation of the collections and the delivery of the orders, and that led to losses of about 30 percent, on average, for most collections,’’ Cabral explained. Those losses, stemming mostly from cancellations due to delays in deliveries, were passed on to the final consumer, who will now benefit from a more efficient schedule and lower prices.

Eloysa Simao, director of Fashion Business, a fair with 170 labels that happens at the same time as Fashion Rio, estimates that prices will fall between 10 and 15 percent next year because of the calendar adjustment. Sales, which have been rising around 15 percent over the past few editions of the fair, will probably rise, because brands will be able to sell higher volumes as a result of the new dates for the shows, she said. For this edition, she expected sales of around 850 million reais ($408.4 million at current exchange) — stable compared with the previous event.

This edition’s result was already above expectations for most labels. Designer Victor Dzenk, from Brazil’s central Minas Gerais state, said his label sold 10 percent more than the fair’s last fall edition in January, more than he had expected. Rio-based Mara Mac sold 15 percent more in the same comparison.

The possibility to sell at lower prices will be a welcome boost to local designers, who face increasing competition from foreign labels, which have been opening stores in Brazil’s main cities over the past few years. And Brazilians are buying more foreign brands abroad, too. They are earning better salaries, traveling more often, and buying fashion in the U.S. and Europe. With imported labels moving in on local designers’ markets, especially in major cities like São Paulo and Rio de Janeiro, fashion labels are stepping up efforts to widen their client base to smaller towns in Brazil’s interior.

“For the first time, I had clients here making significant orders from places like Concordia in the south of Brazil or Eusebio in the northeast, among many other places I didn’t even know existed,’’ said Rita Cruz, commercial director at Grupo Maria Bonita. “That’s really what surprised us this year — this demand from smaller towns.’’

That’s a reflection of deep changes in Brazil’s economy, with the emergence of a new middle class that’s propelling local demand with the help of full employment and cheaper credit. And while clients in major cities are heavily exposed to foreign brands and have easier access to labels like Diane von Furstenberg and Carolina Herrera, fashion lovers from Brazil’s interior opt to buy local fashion labels, because foreign brands aren’t as easily available.

The number of foreign buyers of Brazilian fashion is falling as well. Maria Bonita, for example, keeps only a few clients in Japan, Le Bon Marché in Paris and some stores in Four Seasons hotels, and it’s not making an effort to win more buyers abroad. The Brazilian real is strong against other major currencies, making locally made products more expensive to foreign buyers.

Imports, meanwhile, are rising: Brazil imported $2.09 billion worth of apparel in the January-to-October period, 26.7 percent more than the $1.63 billion imported in the same months in 2011. In October, apparel imports reached $248.7 million, compared with $174.5 million in the same month last year.

During the shows in Rio, Esther Bauman, the designer behind Acquastudio’s luxurious collection, bet on shimmering laces, knits and embroidery with organic materials in a collection that reflected the fires of the Cerrado, the Brazilian savanna. Ecru, gold, red and black were dramatic choices for the main palette. Nipped-waist dresses had collars embroidered with tiny pieces of gold-colored wood, while full lace skirts were paired with corsets that were completely embroidered with glass beads. A lace-covered leather dress with small round flowers made of golden grass — found only in Brazil’s central Tocantins state — was among the most sophisticated items of the season. The headpiece, a bibi hat made of a golden grass place mat topped with a black crow, was among the most extravagant accessories on Rio’s runways.

TNG used black and dark blue denim to create structured jackets and cropped pants that had details made of fish leather from Brazil’s Amazon.

Live accessories drew the most animated responses from the audience during Oh Boy’s display. First, a fluffy, golden Pomeranian puppy served as a hand warmer that matched a bright yellow thick-knit sweater. Then a frightened white cat nearly tore a model’s cat-printed silk shirt while trying to escape the runway. The brand, which targets a younger crowd, drew from a Sixties-inspired look with A-line minidresses and cigarette pants. An image of Choupette, Karl Lagerfeld’s pet cat, created a kaleidoscope of white kittens on silk pants-shirt and miniskirt-jacket combinations.