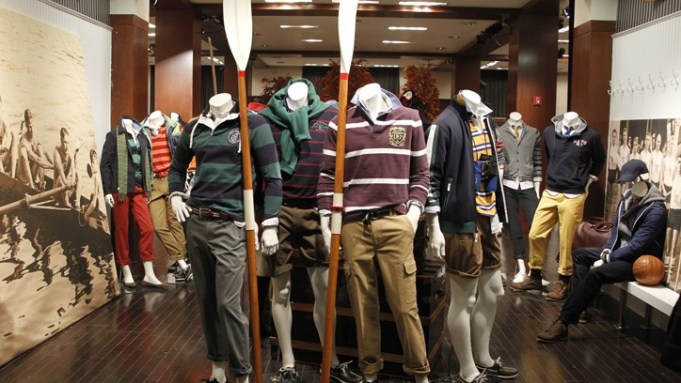 Brooks Brothers wants to embrace another generation of shoppers and it’s quite evident in the fall collection.

“It’s iconic Brooks Brothers modified for today’s world,” said Lou Amendola, the brand’s chief merchandising officer, during a preview of the collection at the Brooks Bros. flagship in Manhattan. He described the strategy as refining the classics across men’s, women’s and children’s wear to broaden the audience without taking a 180-degree fashion turn.

While Brooks Bros. does a big volume selling no-iron men’s shirts, those requiring ironing are emphasized for the younger set. “There’s a generation that wants a look that’s worn in a little,” Amendola said. It’s a less buttoned-up approach that integrates with the Brooks Bros. tradition. That more classic style is maintained with all the Harris tweeds, corduroy jackets, camel and charcoal gray jackets and outerwear, suede shoes and Black Fleece glen plaid suits and Chesterfield overcoats with velvet collars.

Similarly, Brooks Bros. now has a less formulaic real estate strategy and will be revealing some new retail formats. Without giving away too much of the strategy, Amendola did say that a store stocked with about 60 percent kid’s merchandise, 20 percent women’s and 20 percent men’s is scheduled to open in March on Madison Avenue and 86th Street.