By Kelly Wetherille on May 23, 2019
View Slideshow 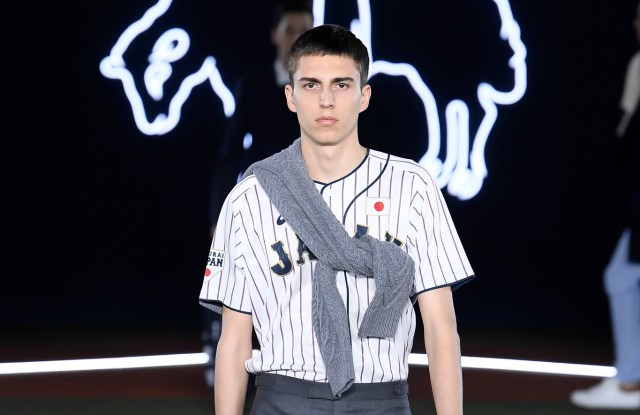 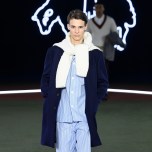 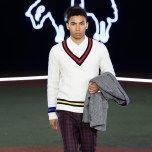 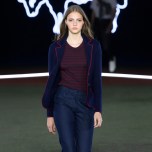 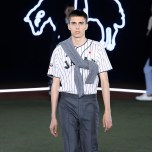 TOKYO — Brooks Brothers returned to the roots of its international business Thursday with a fashion show in the Japanese capital. The event commemorated 40 years since the brand opened its first store outside the U.S. in 1979, which still operates in the same space in Tokyo’s Aoyama district.

“I think at that time, if we were not the first we were definitely one of the first American brands to establish its own presence here,” said Claudio del Vecchio, president and chief executive officer of Brooks Brothers.

Japan is now Brooks Brothers’ second-largest market. About 68 percent of the brand’s sales come from the U.S., followed by 15 percent from Japan.

“In our first early discussions when I was joining Brooks Brothers was how important the Japanese business was for the overall global brand, and that was something both surprising and very exciting,” said Zac Posen, creative director for the brand’s women’s collection.

But del Vecchio said the company’s business is rapidly growing in China as well, and that market will likely overtake Japan within a few years.

“It’s getting close to Japan,” the executive said. “Greater China, the U.S. and Japan make up about 92 to 93 percent of the business. Over the last few years, we’ve grown so that almost 32 percent of the total business is international, and international sales are growing by double digits each year.”

The Tokyo show, which was only the third in Brooks Brothers’ 200-year history, underscored the importance of Japan for the American heritage brand with a theme that holds a major significance for both countries: baseball. Held at an indoor baseball practice field, staff dressed in baseball T-shirts handed out Brooks Brothers ball caps before the show, and ballpark staples such as hotdogs, soft pretzels and popcorn during the after party. The soundtrack included classics from Bruce Springsteen, Johnny Cash, The Cars, Jefferson Airplane and Steve Miller Band.

Brooks Brothers’ fall collection centered around contrasting the sophistication of city life with the comfort of the countryside. Styling by Jim Moore, creative director at large for GQ, resulted in unexpected combinations such as sweatpants with loafers and a blazer, or pajamas with sneakers and an overcoat. A hooded sweatshirt was layered under a corduroy suit jacket, and a classic black tuxedo was worn with a yellow, navy and green plaid coat. In keeping with the baseball theme, some models carried a bat and ball, while others wore baseball caps or jerseys.

The women’s collection, designed by Posen, followed the same city-meets-country theme, injected with an elegant femininity. Slim ankle pants, tipped blazers and patterned sweaters were shown alongside tweed skirt suits and luxurious coats. The more formal women’s looks included two perfectly cut tuxedos — one in deep midnight blue with grosgrain trim, and another in a subtle tartan velvet that shone in the light — and a sequin cocktail dress in a gradation of blue, green and black.

“We have a very wide range of customers here, from professional women to women of leisure, and even expats that are part of the Brooks Brothers woman and world,” Posen said. “And I think a lot of the work that I have done has been really noticed and appreciated by the customers. So that’s been really wonderful.”

Show notes for the collection mentioned a blending of elegance and functionality, tradition and comfort. They also noted a more casual look than that which is normally associated with the brand. Del Vecchio said this evolution — along with the style of the day — is an essential element in Brooks Brothers’ success.

Compared to other global markets, Japan remains more formal overall, with the majority of men still wearing a suit to work every day. This is reflected in Brooks Brothers’ sales in the country, which del Vecchio said are in contrast to China, where sportswear sells far better than suits and formalwear.

“As the world gets a little more casual, you will see a higher penetration of sportswear in our collections. We will go deeper in some of the categories that maybe we were not that deep in [until now],” del Vecchio said.

Posen said he loves visiting Japan, and in the few short days he had been in Tokyo prior to the show he had already been to museums, gardens and shrines. He said he constantly finds himself inspired by Japan and its culture.

“This is a country that has a great appreciation for craft, antiquity, perfection and imperfection. And that balance, to me, is what any great creator strives for,” the designer said. “For sure, Japanese culture has some of the greatest colorists in the world, and sophisticated. The colors of this country make me wild, always. But also print techniques, dye techniques are deep in the culture, weaving techniques of different fabrications. When I hit the ground here I have to take in everything.”