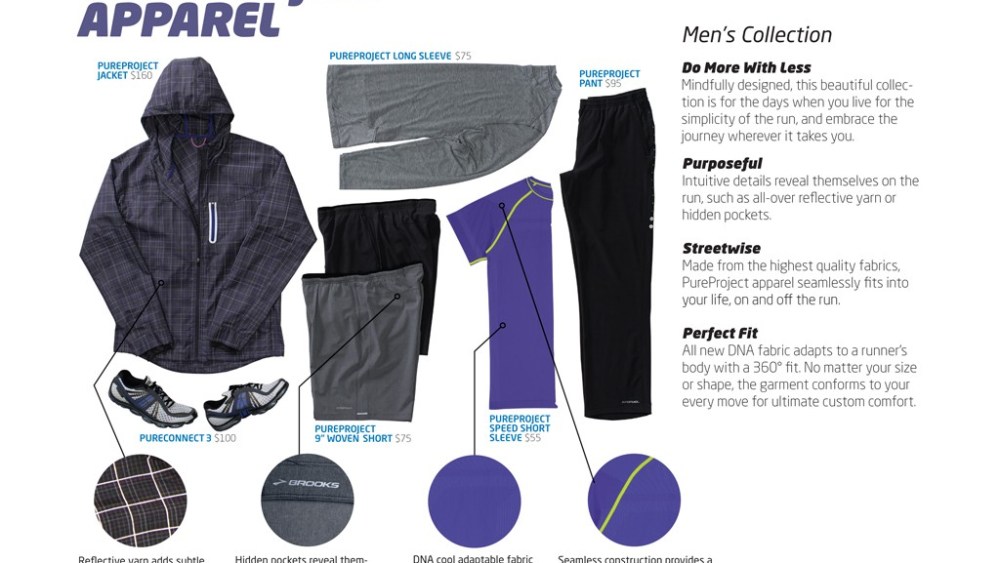 Brooks Sports has carved out a big slice of the performance running shoe category. And now the Seattle-based company is setting its sights on expanding its reach in apparel.

For spring, Brooks will introduce a new collection under the PureProject name, a moniker that is has used for the past two-and-a-half years for a line of lightweight, natural stride-focused shoes. Like the footwear, PureProject men’s and women’s apparel will “give runners an alternative to traditional running apparel,” according to Michelle Ave, director of apparel merchandising and design, one that is “streetwise, sophisticated and minimal.”

The collection will be tight, with just seven styles offered for women and five for men, and will be priced at the premium level, ranging from $55 for a women’s seamless tank to $160 for a men’s reflective jacket.

“This line packs the most technology we’re offering for this season,” Ave added. “It has clean design and extreme versatility.”

Ave said the key attributes of PureProject are “purposeful design” features that only reveal themselves during a run, such as hidden reflectivity and four-way stretch in jackets.

“Perfect fit” is also a strong feature of the collection, she added, pointing to the seamless technology used in jog bras and capri pants for women and running shorts for men, along with moisture management properties in long- and short-sleeve shirts. The final attribute is what Ave referred to as streetworthy design, which allows the collection to look as appropriate at the local 10K as it does at a restaurant.

Ave said the target customer is the avid runner as well as those new to the sport. It will be sold at better national and specialty retailers as well as select department stores.

Brooks will introduce the collection to customers through print and digital advertising as its launch date of January 2014 approaches.

Ave said that although the debut collection is small, she expects the line to continue to evolve and grow. “We believe, based on the response we’ve received thus far, that it will become an important part of our business.”

Brooks, a division of Berkshire Hathaway Inc., had sales of approximately $400 million last year, an increase of 34 percent, and is projecting it will break $1 billion by 2020. It is expecting another 23 percent jump in sales this year, according to the Berkshire Hathaway annual report.