Buyers Focus on Immediates at Intermezzo

Retailers also get a jump on holiday/resort. 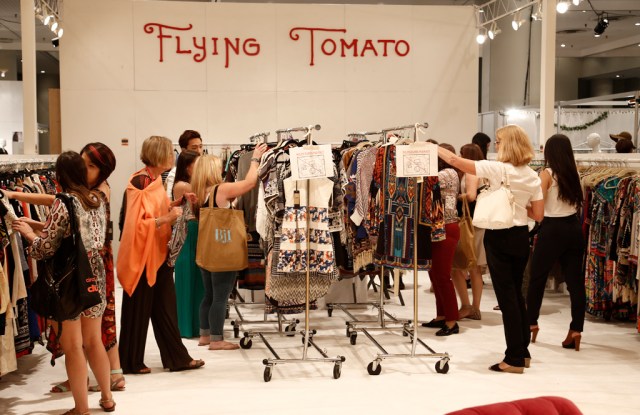 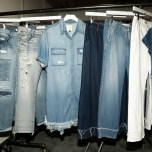 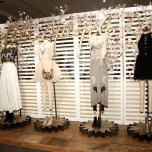 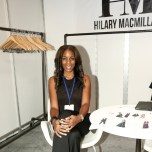 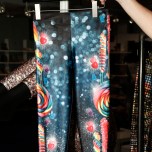 NEW YORK — Retailers shopping Intermezzo and FWD at the Jacob K. Javits Center here were sprucing up their fall buys with immediates and getting a jump on holiday/resort. The three-day show, which ends Tuesday, also featured Circuit (accessories) and Children’s Club.

“It’s the first time we colocated multiple events. It makes it easier for a buyer, and there are greater opportunities,” said Tom Nastos, chief executive officer and president of UBM Advanstar’s NYC Fashion Group, who was observing the action at Children’s Club and FWD on Monday. “FWD is another element in the marketplace, it’s younger, faster fashion.” He said FWD featured 110 exhibitors.

Susan Greenstadt, owner of her eponymous showroom, said, “Basically it’s an accessories show, and Intermezzo are the side dishes. People are filling in and trying to gauge what they need.” She was showing Bobi at the show. “People appreciate the price point and nonseasonal collection. People can fill in anytime with little things and layering pieces.”

“Intermezzo was a small Intermezzo, but we still found some great key pieces for resort,” said Randi Siegal, owner of Rapunzel’s Closet, a women’s specialty store in Palm Beach, Fla.

She said she saw a lot of the “denim chambray blue” color on various fabrics, such as light cashmere sweaters from Vince, cotton Sundry sweatpants and on Michael Stars’ basic tees. “The accent colors seemed to be lavender and soft oranges,” she said. “We bought a lot of tanks, still a lot of high-lo styles. We saw lots of twists on basics, where the shirt has a twist detail somewhere, whether it had a knot in the front on the side or on the back,” said Siegal.  She bought fewer sweatpants this time around, and purchased a lot of palm prints and pineapple graphics, which appear to be a big trend. She noted that Monrow had all-over palm-print shirts and sweats, Chaser had a cute palm tree tee, and Lolo accessories had pineapple appliqués on makeup bags and luggage tags.  “This is great for us in Palm Beach. We found some skirts peppered throughout the lines,” said Siegal, noting she bought a tulle Free People skirt and a smocked patterned skirt from Townsend.

“Otherwise we’re looking forward to buying spring in Vegas later in the month,” she said, alluding to the upcoming WWD Magic, Project and ENK shows in Las Vegas.

The co-owners of Style Camp, a women’s boutique in Philadelphia, said they were at the show looking for immediates and pre-spring merchandise. “We’re looking for unique, well-made product you don’t find everywhere,” said Bitsy Rhoda, co-owner. She praised the denim, particularly the boyfriend jeans, she saw at Hidden, a year-and-a-half-old brand based in Los Angeles.  She also liked “the amazing jacket with big fur collars” she saw at Peri Luxe. In particular, she was going to buy an army-green jacket with a giant pink fur collar. Another resource she liked at Intermezzo was Shape, which had linen shirts in many different colors. She also bought a kimono jacket made out of linen. “It was really simple with great color combinations,” she said.

Eli Homnick, owner of Flatter, a women’s boutique in Jerusalem, said he was at Intermezzo looking for immediates. He had bought some tops from Tolani. He said that overall, the prices in Jerusalem were about 40 percent what it would cost in the U.S. due to VAT, shipping and taxes.

Sharon Sinkevich, owner of The Apple Tree, a boutique in Stroudsburg, Pa., liked the pants at Avenue Montaigne. “I love this fabric at Avenue Montaigne,” she said, pointing to the flare pant in flannel. “It’s cozy and my guests, when they get dressed up, want to be comfortable.” She was buying resort and early spring and some immediates.  “I like the pants, instead of wearing leggings forever. And they’re pull-on,” she said.

She also liked the Alashan cashmere sweaters she saw at Intermezzo “and the fact that their cashmere has such a nice hand, but it’s lofty.”

“I like the pop of colors for resort. I think they give people a reason to buy when it’s so grey and cold out,” she said.

Skin was showing at Intermezzo for the second time. “Stores responded to the jacquards and novelty of the prints,” said Melinda Wansbrough, sales director. A popular item was the fringe pieces. “I think people are really excited about pre-spring because of the long lead time for sales. You don’t get the markdowns,” she said. She explained that people are buying the lighter colors for Florida and the West Coast and the dark colors and graphite, for the East Coast.

Jaime Nortman, managing partner of Peace of Cloth, said she was selling a lot of wide-cuff pants novelty, particularly houndstooth, jacquards and animal prints. She also said jackets were doing well, showing off one with a long zipper going up the back. For pre-spring, she’s showing a lot of color.

Linda Richards, owner of her namesake outerwear brand, said her business was very good at Intermezzo. Last year, fur was so successful that retailers have been taking it in a lot earlier. She said she was selling to many specialty stores, especially those coming for accessories at Circuit. “We’re doing well with our gloves and hand warmers,” she said. She also does well with fur headbands and mittens. “This is a good moment to be in fur,” said Richards, pointing to a hooded poncho with fur collar for $198.

Lauren Morris, director of sales at Zara Terez, who was showing in the Flex activewear section said, “Business is so great. We’re having one of our best shows.” She said people are buying immediates and they’re also buying holiday prints and multiglitter prints, and the subway prints sold right out. She’s also showing a collaboration with Dylan’s Candy Bar, which is a candy printed legging that wholesales for $33.

Yaslynn Mack, a sales representative for Hilary MacMillan, a Canadian designer, was sitting in a practically empty booth with three styles hanging on the rack. “The clothes got stuck in Customs,” said Mack, noting they were coming from Canada. She said she expected them to arrive Monday at 11:30 a.m., but as of 1:30 p.m., they hadn’t arrived yet. The clothes wholesale for $100 and up, and focus on dresses and gowns for spring, and furs and leathers for immediate delivery. On Sunday and Monday she was showing photos from the look book to interested buyers.

Avenue Montaigne was doing well with the flare pant. “Flare is the pant of the season,” said Meg Himmelfarb, sales manager. She said she was selling it in every fabric. What were especially selling well were the no wool stretch flannel, as well as crepe.

At this edition, UBM Advanstar added FWD, which showcased junior vendors, including apparel and denim that are typically focused on the Las Vegas market. Among the brands being featured were Nikibiki, The Classic, Urban Day, Mur, L’atiste, Flying Tomato, Wow Couture and Blu Pepper. “Business has been good,” said Scott Baick, show manager of Wow Couture. He said he was expecting to see department stores Monday afternoon and Tuesday. For the most part, he was selling fall merchandise.

Minsoo Jung, sales manager for Blu Pepper, said outerwear had been selling well for late winter — October and November deliveries. In particular, they were doing well with leather jackets and anoraks.

Ron Lee, trade show manager of Flying Tomato, said that business has been “fairly good,” at FWD. “Yesterday [Sunday] was quiet, which was surprising, especially since Magic is one of our best shows. Today it’s picking up,” he said.