Most recently she was senior creative director, women's sportswear apparel at Nike.

Calvin Klein has finally found its global head of design.

The company has tapped Jessica Lomax as executive vice president, global head of design, effective Dec. 9. She will report directly to Cheryl Abel-Hodges, chief executive officer. It is a newly created role at the brand.

Lomax joins Calvin Klein from Nike, where she is currently senior creative director, women’s sportswear apparel. She has led collaborations including Nike x Sacai, as well as several sustainability projects for the brand. Earlier, Lomax worked with Hussein Chalayan for Puma and consulted for numerous sports and fashion brands.

In December 2018, former chief creative officer Raf Simons left Calvin Klein some 28 months into his tenure and eight months before his three-year contract was due to expire. Following his departure, Klein exited the 205W39NYC high-end collection business and shuttered the Madison Avenue flagship. Simons is now co-creative director of Prada.

In early 2019, Klein revealed that a search was under way for a global head of design who would lead apparel design, which has been ongoing until now.

Suzanne Barton — who became chief product officer of Calvin Klein in July 2019 overseeing the brand’s global product organization, including all design and merchandising functions — will be leaving the company in January to pursue other interests.

Ulrich Grimm, global head of nonapparel design at Calvin Klein, left the company after 22 years effective Aug. 2. His position was eliminated and his responsibilities were assumed by other executives.

In Lomax’s new role, she will lead Calvin Klein’s global design strategy and provide creative direction across all areas of the business, including licensees. She will be responsible for defining and strengthening all product categories for the lifestyle brand, with a focus on essential hero product, in addition to driving collaborations and sustainable innovation.

“Jessica excels in creating clear product visions that are rooted in brand DNA and directly connected to commercial success,” Abel-Hodges said. “Under her creative design leadership and through her collaborative and innovative approach, I am extremely confident that our product direction will continue to become more consumer-centric, sustainable and inclusive.”

Asked how Lomax’s role differs from that of Barton’s, Abel-Hodges said Barton had oversight of both design and merchandising. “The evp, global head of design role that we hired Jessica for is a newly created role focused on design for the Calvin Klein brand,” she said.

In the last month, Klein has strengthened its global leadership ranks with two additional hires, as reported. Jacob Jordan, who had been a consultant at Calvin Klein since last May, was named global chief merchant and product strategist. He had previously been with Apple and Louis Vuitton. Linh Peters, formerly of Starbucks, joined as global chief marketing officer with responsibility for all aspects of Klein’s consumer marketing organization.

Abel-Hodges emphasized that Lomax and Jacob will partner closely on the product.

“Jacob is focused on maximizing the commercial impact of our product and creating assortments that elevate the hero items the design team is creating. Both roles are critical to our success which is why we brought in separate talent to  focus on the design and merchandising functions. Together, as next gen leaders, they will partner closely to connect our product to where the consumer is going,” said Abel-Hodges.

In light of Lomax’s background at Nike and Puma, Abel-Hodges was asked whether sport and performance will become more essential to the brand. “Jessica has strong experience working across a variety of product categories, which is key to our  positioning as a global fashion lifestyle brand. Underwear, jeans and sportswear are our core fashion businesses, underscoring our casual lifestyle focus, but we do see a strong opportunity for our newer categories including performance, swim and kids,” she said.

Since Simons’ departure, there have been numerous reports about collaborations and potential hires for the top design position at the brand.

In September, WWD reported that American rapper Kendrick Lamar has been in talks with Calvin Klein about a design project that would involve products and content, and would be released early next year. At the time, the likelihood of a deal and other details couldn’t be learned. The company declined comment about it.

Calvin Klein teamed with Kith in September for a joint underwear venture, marking the first time in the fashion house’s history that it linked with another brand for its iconic underwear. The company plans another chapter of this collaboration next year. 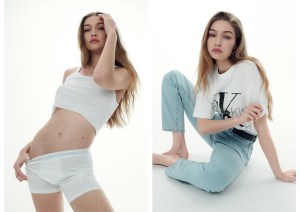 Last January, Calvin Klein hired Tim Coppens as a consultant design director, and he continues at the firm.

Abel-Hodges said collaborations will still be an important part of the brand going forward.

“We see Calvin Klein as a minimalist canvas for creative exploration. We’re interested in exploring collaborations and partnerships with world-class creatives, whether that shows up in our product, our marketing, or our brand experiences; they connect us to culture and our target customers,” said Abel-Hodges.

Asked what Calvin Klein stands for today, she said, “Calvin Klein  stands for minimalism, sensuality, inclusivity, a youthful attitude and an avant-garde approach.”

As for whether they would ever consider doing a high-profile designer collection again, Abel-Hodges said, “Calvin Klein is an iconic global lifestyle brand with the license to play in all categories. At the moment, we are focused on setting the global design strategy for the brand, with a focus on essential hero products.”

For the most recent second quarter, PVH Corp., parent company of Calvin Klein and Tommy Hilfiger, reported a $51.7 million quarterly loss. Discussing the results in September, Manny Chirico, chairman and ceo of PVH, said he saw opportunity in the casualization of the Calvin Klein brand.  “Calvin [Klein], by the nature of its brand, has a huge, huge designer underwear and women’s intimate business. And a big jeans business that really plays into the casualization [trend]. And the Tommy [business] is probably as a brand, much more of a casual brand, much more of an athlete brand,” he said.

“Our assortment will be focused on relevant categories. And we are in a position to chase [those categories] until our better-than-expected demand materializes,” he said.

Chirico added that revenues in both calvinklein.com and tommy.com grew triple digits in the most recent quarter year-over-year while adding many new customers.