“I’m calling myself a sensualist rather than a minimalist.” That was global creative director Kevin Carrigan’s analysis of his fall lineup for Calvin Klein White Label — and he wasn’t kidding. 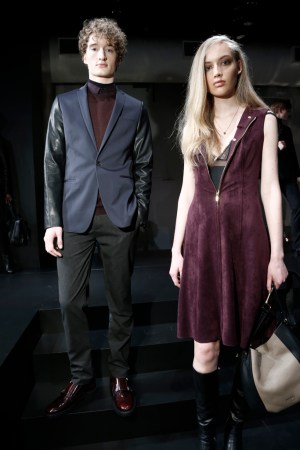 “I’m calling myself a sensualist rather than a minimalist.” That was global creative director Kevin Carrigan’s analysis of his fall lineup for Calvin Klein White Label — and he wasn’t kidding.

Held for the first time closer to the cocktail hour than the morning brew, Thursday’s presentation featured models in various states of dress in mise-en-scène that gave off a loungy, slightly louche vibe. And Carrigan wasn’t afraid to lose the hard lines to show a lot of skin, albeit tastefully so. Chalk, ecru, tan and black were paired with powdery ice blue and blush pink. In this age of transparency, he didn’t shy away from a little lace or a black bra strap peaking from an ecru knee-length dress or a transparent sleeveless V-neck top (later removed to reveal an ultragirly bra) worn with a lean powder-blue skirt.

Channeling the label’s pre-minimalist days “for a little eroticism,” Carrigan drew from beautiful Calvin Klein and Bruce Weber images from the Eighties. Another source of inspiration was the all-black, “very decadent, kind of sexual” East 58th Street apartment designed for Klein by Joe D’Urso.

For men, silhouettes were narrower, as seen in slim-fit suits in optical patterns and drain-pipe jeans. Fabric choices were also innovative: a black denim jacket bonded on the back with jersey, biker jackets in nylon, and faux-washed leather aviators. Much of the offering had marked Sixties references — but with a modern twist — such as a crewneck sweater in mini and macro jacquards, and a bouclé peacoat with a higher button stance. The mostly black lineup, interjected with occasional baby blue, was accented by oxblood shoes, bags and other accessories.

In underwear, the fit was still body-hugging, this season with a visual boost from metallic-hued waistbands. But perhaps the most striking look of all was a male model lounging in a sauna wearing nothing but the brand’s new square-face watch and a blanket draped over his lap. Sensual indeed.