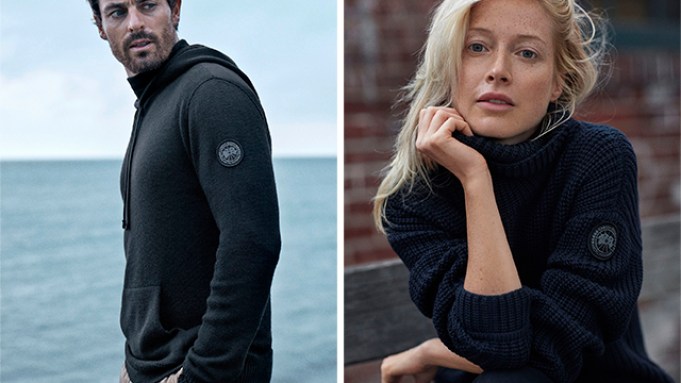 The 15 styles include women’s and men’s mid- and heavyweight knits, made from merino wool, along with knitwear that combines merino wool with down.

“When you think of us, you usually think of deep cold. The inspiration for this was drawn from the damp that’s in the West Coast. Many of our styles actually have names that are drawn from British Columbia,” said Jackie Poriadjian-Asch, chief marketing officer of Canada Goose. “We were inspired by ‘hoodie culture’ and that bone-chilling cold you get, and the need to stay dry and protected.”

“We are really bringing the iconic pieces you’ve come to love from Canada Goose, but giving it a spin in knitwear that you probably haven’t seen before,” Poriadjian-Asch added, noting sizes include slim, regular and oversize fits. Soft mid-weights retail for $295; chunky heavier-gauges start at $395 and HyBridge knits incorporating down start at $595 and go to $650. The knits have a neutral palette of blacks, navys, grays and spruce green.

“This is more like everyday wear,” she said. “I think it’s a lifestyle piece that was inspired by the West Coast. It will be hard-working piece that will effortlessly fit in your wardrobe. They are classic, timeless styles.”

The knitwear will be sold primarily at canadagoose.com, and its two flagships in Toronto and New York. It will also be available at Saks Fifth Avenue in New York and Nordstrom in Chicago, as well as Selfridges in London, Printemps in Paris and Breuninger in Germany. The company declined to reveal first-year sales projections.

The company has developed a digital campaign featuring a video, shot by Grant Harder, that details the “making of” the knitwear. “It’s really about the storytelling around the entire journey,” Poriadjian-Asch said. The video reverses the process — starting with the finished product and ending with the design process. Consumers will be able to see images including the craftspeople behind the products, the sketches and the materials.

The knitwear collection is made in Italy, and designed in Canada in partnership with Italian craftsmen.

“We are absolutely proud to support Canadian manufacturing and that remains unchanged. But when we looked at knitwear specifically, we continued to want to make the best-quality products and felt that knitwear in Italy, after a very long journey, made that decision the right one in this particular category,” she said.

The company, which went public in March, has a market capitalization of $1.96 billion. The shares have a dual listing on both the Toronto Stock Exchange and the New York Stock Exchange.

The company plans to open five stores this fiscal year — in Chicago, Boston, London, Calgary and Tokyo, the latter location operated by a distribution partner.

In addition to knitwear, which will be rolled out gradually over fiscal 2018 and 2019, the company is developing fleece. Other categories it may pursue in the future include footwear, travel gear and bedding.