The label's creative director, Guillaume Henry, has joined up with Petit Bateau to create a capsule collection for adults and children. 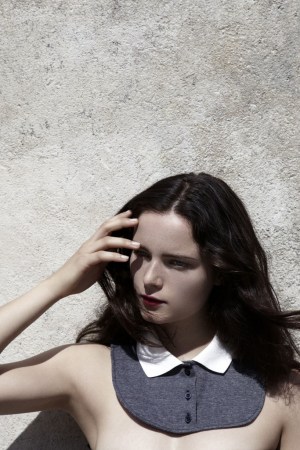 PARIS — Carven creative director Guillaume Henry has joined up with Petit Bateau to create a capsule collection for adults and children, as part of ongoing efforts by the iconic French children’s wear brand to expand its international footprint.

Consisting of nine styles, the collection will debut on Nov. 5 at Colette in Paris and 10 Corso Como in Milan, in addition to as-yet-unnamed boutiques in London and Brussels, before becoming available in 240 Petit Bateau points of sale worldwide on Dec. 5.

Henry noted it was the second collaboration between the two brands, after Petit Bateau produced a T-shirt for a capsule babywear line that Carven designed exclusively for Paris concept store Colette to celebrate his arrival at the fashion house in 2009.

Since then, Carven has also collaborated with Robert Clergerie and Zespa on shoes; Lafuma and Upla on bags and backpacks; L’Amy on eyewear, and Les Néréides on jewelry. However, Henry said it was the first time that Carven had merged its universe so closely with that of another brand.

“Our collaborations up until now were often associated with a collection and a specific narrative, but the line we have developed together with Petit Bateau goes far beyond that. It’s no longer a story linked to a collection; it’s a story of shared values,” he explained.

“There is a form of joyful simplicity to what they do. When I think of Petit Bateau, I think of freshness,” Henry told WWD.

The designer used Petit Bateau’s trademark jersey for everything from a formfitting smocked T-shirt dress with a white cotton collar, which comes in both navy and red, to a bib consisting of a white polo collar on a gray cotton piqué dickey.

“We tried to define the Carven wardrobe through a few emblematic volumes,” he said. “It’s always about that mix between two extremes — both seductive and demure.”

“We would like to grow our sales outside France and outside Europe, so the partnerships have a strategic dimension. It’s both a way of drawing people into our stores but also to become even more present overseas,” he said.

Petit Bateau presently does 45 percent of its sales outside France and would like to increase this to 60 percent in the next few years, Pergament said.

The brand recently tapped Maison Kitsuné cofounders Gildas Loaëc and Masaya Kuroki to take over the artistic direction of its men’s and women’s adult collections, starting fall-winter 2013. As a result, future outside collaborations will likely focus more on children’s collections, Pergament said.