Catching Up With Joseph Abboud

Thirteen years after selling his name, the designer regains creative control of his label at Men’s Wearhouse. 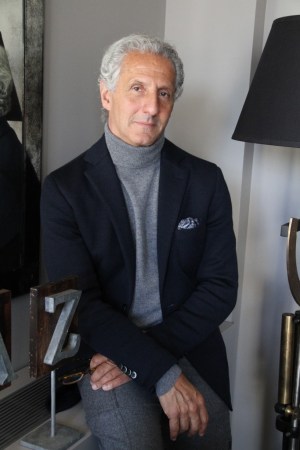 Men’s Week: When you took the job of creative director of The Men’s Wearhouse last year, did you know it was going to play out like this?
Joseph Abboud: My whole life has been organic. If you asked me to write a business plan, I couldn’t do it. A lot of this is a trust factor about the people you’re going to work with. When I haven’t trusted my instincts, I’ve gotten in trouble. Doug Ewert is a great chief executive officer, he’s a merchant and a visionary, and David Edwab is a business engineer. So I thought, how wrong can this be? And with the size of the organization and their financial capabilities, no matter what we do, it’s going to be exciting. But there was one really important play here — and that was that I no longer wanted to be in the wholesale-retail business.

MW: Why is that?
J.A.: I think the whole landscape is changing dramatically. Traditional wholesale-retail as we know it is a dinosaur, and vertical businesses are the way to the future because you can control your own destiny and you can create better price-value for your products. For me, the end game is to give the customer the best product. They’re not buying a label, they’re buying a product. So being in this structure and being able to have our own retail stores, going directly to the consumer, is the future of our industry.

MW: How did it feel to finally be able to again design the label you created in 1987?
J.A.: I am so happy that this brand is now in a public company that focuses on men’s wear. That is such a legacy for me as a person. If I look back at myself as a kid looking in Louis’ [Boston] window wanting to buy a tie for my junior prom, to this day, I think I couldn’t write a better script. I’ve met princes and kings, but also witches and demons and goblins, and so it’s really been an adventure.

I worked for Chanel for two years designing the men’s wear in the late Eighties, and the dedication and the reverence from the folks who owned Chanel to Coco Chanel, the individual, and her essence and DNA is what I always thought is the legacy of a great brand. And I believed if I were lucky enough and this brand went on to live forever, at least I’ve established something that had a future in a public company that focuses on men’s wear. I love doing home furnishings and women’s, but my true love is men’s wear. So it couldn’t have ended up in a better place. And I couldn’t accomplish individually what we in the Men’s Wearhouse corporation can accomplish — opening retail stores, large advertising budgets.

MW: It must be rewarding that the label still exists despite the changes in ownership and design direction over the years.
J.A.: I saw from the inside a deterioration of the DNA of the brand in the years that I wasn’t there. Now that sounds very egocentric and I don’t mean it to, but just knowing inherently the brand and what it was created upon: its color direction, its fit direction, its position in the market. It was like a plane flying through turbulence — it was still flying, but it was rough weather. A lot of the stuff was so far from what the Joseph Abboud DNA is, it’s not even close, right down to the label. We brought back the heritage label, and that is a big part of getting us on the right path for the brand.

MW: What is the brand DNA?
J.A.: It’s a modern American brand. It plays right in the middle of the Atlantic, because we make the American guy more sophisticated and we try to bring the European guy to a more American sensibility, so it’s a big sweet spot. Now that we’re reestablishing our relationships and the disciplines with our licenses, any product that is a Joseph Abboud product should be seamless, whether it’s shoes or eyewear or international. You have to give Ralph Lauren enormous credit for the power of the discipline in his brand. Very few people can achieve that but his message is right: If it’s a Ralph Lauren product, it’s a Ralph Lauren product. I think we have some work to do in getting all the licenses back to understand the DNA and to get on board with the new branding, labeling and product.

MW: How many licenses do you have?
J.A.: Approximately 19 to 20 and international. One of our most prominent licenses is Onward Kashiyama. That was one of the first licenses I signed in the early Nineties. They have shops-in-shop and we’ve had conversations about redefining the shop concept because a lot of the DNA has dissipated. We’re working with architects to reestablish the Joseph Abboud DNA for shops and potentially for our own stores.

MW: Tell us a little about the design direction for the collection and when we’ll see first product.
J.A.: We’ve built a very powerful creative team in New York and are launching for spring ’14. In this vertical structure, we’re going to produce 250,000 to 300,000 tailored garments made in that factory in Massachusetts, 40 miles from where I grew up, with all Italian piece goods. We’re going to offer incredible value and favorable prices for the consumer. And we’re in the process of designing fall ’14 now.

MW: What are some of the signature pieces?
J.A.: Signature for me has always been the texture — I always say texture is the new color palette. I’ve always been driven by fabric first, and the fabric says: “OK, make me into a soft jacket.” The signature is always going to be our more sophisticated color palette where we aren’t primary in terms of color. We leave that to other brands. We tend to take a more artistic approach to our palettes and we do a lot of half-tones. But what’s really been true over the years is that it’s very wearable. I don’t want to do boys’ clothes, I want to do men’s clothes.

With the color explosion, I felt everybody was a cereal salesman selling Fruit Loops. It got to a point that every guy got to look like a little boy, and my whole life, I’ve been trying to make Americans become less like little boys and more like men. With the original Ivy League/preppy concept, guys looked provincial. A guy walking down the street in Paris with a navy blazer, a button-down and a pair of loafers, you could spot an American a mile away. I just want to integrate them into the world a little bit. Another signature is the softness of our garments, so you don’t look like the suit’s wearing you, but that you’re wearing the suit and there’s not a hanger in the back of your neck.

MW: Do you have total creative control or do you work with the merchant team?
J.A.: When I came on board, I said we’re going to provide a creative support system for the company so it’s very collaborative. This company is very fluid, and if we find a new way to do things, they’re open to letting creativity drive profit. Nobody runs completely independently. Any designer has to interact with the merchants. We have the obligation to create something that’s saleable, and the buyers and merchants have an obligation to move the company and the customer forward. That’s where finesse comes in and why I always say life is not black or white but a million shades of gray flannel. It’s a lot of touch and feel.

MW: Will you also be putting you mark on the stores as well?
J.A.: Yes. We are opening a new Men’s Wearhouse store on Madison, right across from Paul Stuart, that is going to have a whole new DNA. You’re going to see an evolution. And my team is here to provide creative support to all the other brands.

MW: So you’re in a good place in your life right now.
J.A.: From a personal place, it’s another mountain top, another plateau, and over the years, it’s been quite an adventure story. This is what I love doing. If I don’t do it here, I’ll do it somewhere else. It’s what drives me. From the part-time job at Louis making $2.30 an hour, it’s been a long road. But I’ve never felt more on top of game after having had controversy, challenges and adversity. As Kelly Clarkson said, things that don’t kill you make you stronger. So for me, it’s a wonderful place to be.