New Designers Pitch In for Obama’s ‘Runway to Win’

The campaign has lined up nine new designers and celebrities to help create products to support its reelection efforts. 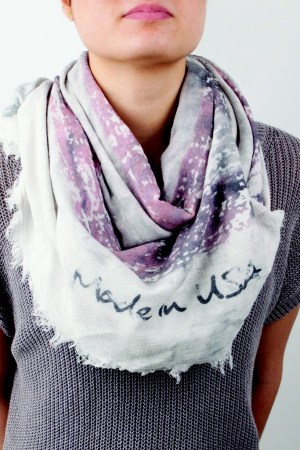 With election day just 48 days away, the Obama and Romney camps are courting their respective contingencies with considerably different products.

Building on the popularity of its “Runway to Win” initiative, the Obama campaign has lined up nine new designers and celebrities to help create products to support its reelection efforts. Sarah Jessica Parker has pulled together “a gym T,” Beyoncé and Tina Knowles have created a three-pack of onesies and Ricky Martin has designed a crewneck T-shirt.

Other products being sold as of today via the Runway to Win Web site include a makeup bag by Rachel Zoe, a customized backpack by Chanel Iman and oversize scarves by Nanette Lepore, Yigal Azrouël and Kerry Washington. Parker collaborated with Tracy L. Cox Design and Washington got help from Stefani Greenfield and Desiree Gruber. The American-made collection retails from $45 to $95, with all proceeds benefiting the Obama Victory Fund, a joint fund-raising committee of Obama for America, the Democratic National Committee and several state Democratic parties.

Taking a break from shooting the second season of “Scandal,” Washington, whose film “We the Peeples” is due out in the spring, said the Runway to Win effort is “kind of a symbolic gesture” of how supporters can lend whatever talents they have. “I don’t necessarily have talent for design, but fashion is a big part of my career and how I live my life,” she said.

Washington, who spoke briefly during the Democratic National Convention and will soon be back on the campaign trail, said she is eager to wear her Runway to Win scarf when she is out and about.

While the Romney campaign did not return requests for comment Monday, its Web site sells an assortment of red, white and blue items including lapel pins, silver-plated “R” earrings, T-shirts and sweatshirts.

Launched in February, “Runway to Win” initially showcased the work of 23 American fashion designers who supported the President’s reelection campaign. The President has no shortage of fashion industry supporters. In June, Parker opened up her West Village townhouse for a $40,000-a-plate fund-raiser she cohosted with Anna Wintour. The Vogue editor in chief reportedly has raised $2.7 million for the Obama reelection campaign. Tonight Obama will be the guest of honor at another $40,000-a-head fund-raiser, hosted by Beyoncé and Jay-Z at 40/40, the New York club the hip-hop singer owns.