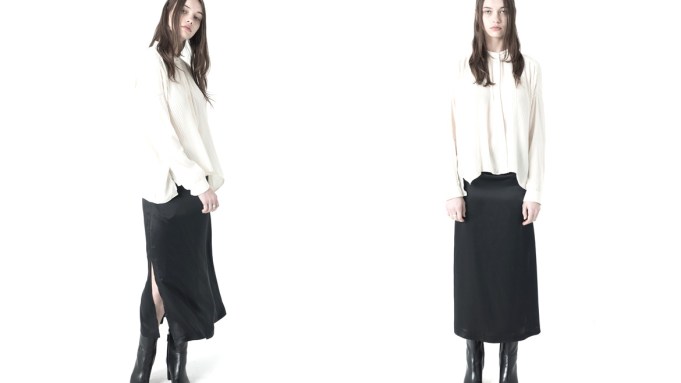 During New York Fashion Week: Men’s, female models wearing men’s clothes was a common occurrence. But oftentimes this was a designer’s aesthetic choice rather than a new business proposition.

But Chapter, a California-based men’s wear line that showcased men and women during its fall 2016 presentation, is actually creating a women’s line.

“I’ve gotten requests from stylists and friends to shoot our clothing on women so it’s always been on the mind, “ said Devin Carlson, the brand’s designer. “This season, the silhouettes that I was creating lent themselves to women’s and it was a natural progression.”

The women’s collection doesn’t veer too far from the men’s assortment. It’s made up of tailored coats, cropped knits and oversize trousers made from lambskin, silk and wool blends. Carlson said the brand is targeting retailers including Need Supply, Barneys New York, Mohawk General Store and Tenoversix and it will be available in late August or early September. Chapter’s men’s line is sold at retailers including Odin, United Arrows and Ron Herman.

Chapter, which is owned by Townes, a creative agency, is one of the many emerging men’s wear brands from California that are flooding the New York men’s wear circuit. Carlson believes this movement is long overdue.

“I think that Los Angeles has been at the forefront of streetwear, and I don’t mean mainstream streetwear, for a long time and hasn’t got enough credit for it,” Carlson said.

According to Carlson, showing at New York Fashion Week: Men’s is mostly a marketing exercise, but he’s seen a return on investment.

“I feel like for all of the men’s brands that participate in men’s week, it helps build momentum and I think that momentum carries on throughout the season,” Carlson told WWD.