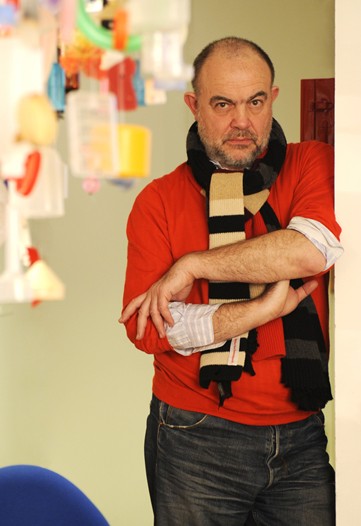 The eternal allure of the Parisienne – and her envy-inducing je ne sais quoi — puzzles even Christian Lacroix. Why is the city such a font of great style? “The best answer I ever heard was by Madame Grès, and she said, ‘Because of the sky.’ Great point, but you have the same sky in New York and London,” muses the affable couturier, a striped scarf tied around his neck just so. “It’s a mystery forever.”

Even though Gallic style has been popular for several years, Lacroix’s masterful and lighthanded treatise on Paris chic was a tour de force — especially since his red-lipped beauties, their hair twisted into perfect, glossy chignons, paraded on a stark cement floor in a grungy parking garage, with a backdrop of antique and broken mirrors the only props. With just 31 looks, the couturier proved that, no matter the surroundings, elegant and peerless clothes — from tapered peacoats and gently poufed skirts to elegantly draped jersey dresses — can play anywhere.

Despite the leaden sky visible through the large windows at his design studio on the Rue de Bretagne, Lacroix is in an ebullient mood as he talks about his collection, sharing his encyclopedic knowledge of fashion while also confessing to crippling preshow jitters. (“When you are sure of a collection, it fails,” he insists.)

The Forties—“between the war and Dior,” to be exact—was the fecund fashion period that this season inspired Lacroix, who considers himself an outsider to Paris’ legendary style. “As I say very often, being brought up in the South of France, I have the same approach to the Paris girl as an American,” says Lacroix, a native of Arles who grew up amidst Gypsy and Provençal traditions, discovering Paris fashion mostly through its romantic depiction in movies. He also heard tales from his mother of how great Parisian women looked, even during the German occupation. “They tried, without a lot of money, to look very elegant, very clean, very neat, very chic. It was their way of resisting,” he explains.

Lacroix also trumpets the postwar influence of “elegant casual” from America for influencing French houses with a “neater, simpler” approach. “It’s a little bit what I wanted this season: a well-cut coat, a nice jacket or a dress, a little bit of lace, not too many prints this time,” he says.

A keen observer of today’s fashion world, Lacroix notes that many of the best designers in Paris also hail from elsewhere: Marc Jacobs at Louis Vuitton, Karl Lagerfeld at Chanel and Alber Elbaz at Lanvin. He observes that even Dolce & Gabbana are today infl uenced more by Paris than their beloved Sicily. “I think it’s a French style through foreign eyes — that’s why it’s so strong,” he muses.

One of the biggest risks the designer took this season was leaving a grand tent in the Tuileries to go to an unheated Marais parking garage — a location one associates more with a young, penniless upstart than an acclaimed couturier. Lacroix says budget was the primary reason for the change, in anticipation of lower orders due to the economic crisis and also reflecting that the house, owned by Florida’s Falic Group, is still in turnaround mode.

Yet the designer viewed it as an opportunity to rethink his guest list and show in a way more in tune with the times. Still a Marais resident, Lacroix used to live almost next door to the garage and had once attended the fashion show of a former assistant there.

“It was something not too dirty, not too dramatic. It was a very nice balance for me,” he says.

Last year, Falic embarked on a search for an investor to accelerate the company’s expansion, up to an outright sale of the company: no mean feat in the current economic downturn. Asked about the prospect of new financial partners, a serene-sounding Lacroix says, “I’m very confident,” noting the house’s chief executive officer, Nicolas Topiol, has been in touch with several interested parties.

At press time, sources said Falic was in advanced discussions to sell a stake to a Swiss group.

Lacroix doesn’t flinch when asked why his couture shows garner more consistently positive reviews than his ready-to-wear. “It’s because my real job is couture,” he shrugs. In fact, the designer confesses relief that his new owners scuttled the Lacroix jeans and Bazar secondary lines to reinforce the brand’s upscale positioning, and revels in his special atelier to produce rtw that is connected with his couture salon. “And now I’d like to work on accessories in the same way,” he enthuses.

Meanwhile, Lacroix’s extracurricular activities continue to multiply. Asked about them, he calls to an assistant, who prints out a three-page list detailing projects for opera costumes, movie theaters, set designs for various exhibitions, a hotel near Notre Dame, a book of fairy tales and a tramway for Montpellier. All this, and the man still has time for shopping, confessing he just went to the l’Eclaireur boutique and purchased several sweaters in bright colors, like the vivid red V-neck he was sporting.

“For people like me, when they are a little stressed or depressed, the best medicine is spending. I think that when you provide yourself with a little bit of pleasure, with the color, the fabric, the sweetness of something—it helps,” he says, stroking one of his cashmere sleeves. “In Paris, France, we have to sustain this idea that fashion is something very important in life.”