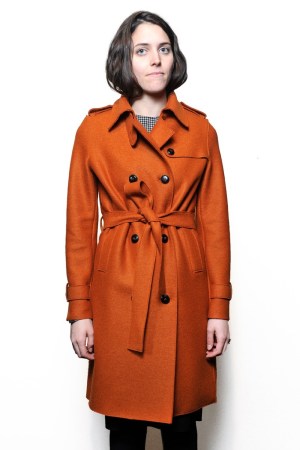 This story first appeared in the March 12, 2012 issue of WWD. Subscribe Today.

Surpluses of heavy clothing left over from an unusually warm winter and price-sensitive shoppers smarting from the global economic crisis took their toll on buyers.

Catherine Thoumir of Parisian concept store 44 put it more bluntly: “There’s less interest in ready-to-wear, because it’s easier to sell accessories.” She said she was also focusing on products like leather jackets. “We’re raising the quality level. That’s what you have to do right now.”

Some brands came up with creative solutions with all-in-one garments that are comfortable and light, and can be worn at work, home or to a party.

At Tranoï, Harris Wharf London designer Giulia Acchiardi did all of the above, and said she couldn’t write orders fast enough. She created a high-end, stretchy but soft unlined wool coat and jacket that feel like cardigans but have a chic look. Acchiardi said the secret to keeping her jackets feeling more like sweaters is to forego linings and create a flexible wool fabric that is knitted, felted and pressed. The garments stand stiff but bend easily to the touch.

Brands said they had tried to provide a wider spread of prices, and generally, buyers said budgets tended to mirror those of 2011. However, in a sign of increasing optimism, several retailers said they were open to spending a little more than originally budgeted, if they found that must-have item.

Others were less optimistic, like Tracey Cheng, merchandising manager for I.T Apparel Ltd. stores in Hong Kong and China, who said, “As buyers, we always look for new brands in the trade shows, so we want to see something that is daring. When we see something that is really commercial, it’s the same, so boring.”

Color trends on offer were darker for next winter, with hints of dark green and a range of reds. Another spectrum of bright, colorful pattern prints that mix and match were seen at all the shows, notably with bird — especially parrot — prints.

At Atmosphère’s, a beautiful collection of original prints by U.K.-based Charlotte Taylor was a bright example of this.

Another elegant take on bird and ethnic print trends was seen in the Art Nouveau-inspired collection by Forte Forte. Mineral reds, coppers, and rusty browns were mixed with references to Indonesian geometric weaves. The brand works on “building a wardrobe” for several seasons, but some of its most expensive pieces were selling well.