Stuart Vevers may be British, but he’s passionate about American companies and brands. The creative director of Coach has used Disney characters as inspiration for his apparel collections for several seasons. Now he’s working with another American heritage brand for his latest collaboration: Champion.

Ned Munroe, chief global design officer at Hanesbrands, Champion’s parent, said working with Coach had been on his wish list for “a long time,” and when Vevers reached out, he “jumped up on the table” with anticipation at the thought of working together.

He said both companies have a legacy as American brands with a sports origin. Coach’s first bag was inspired by a baseball glove and Champion has been dressing athletes for more than 100 years.

“Every collaboration we do has to have a creative connection,” Munroe said, adding that there has to be “great synergy” between the partners. “We’ve done collaborations before that have done well, but we were not thrilled with the execution. This is one that will not disappoint.”

Once they decided to work together, the companies did a “deep dive” into each other’s archives. Munroe joked that although Champion’s archives are extensive, “Coach’s made ours look like a messy closet.” 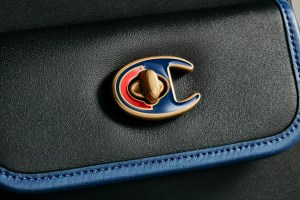 The result is Coach x Champion, a limited-edition collection that combines Coach’s skills in craftsmanship with Champion’s athletic apparel roots. The collection, which will go on sale beginning on Feb. 2, features leather bags, leather jogger pants, sweaters and shearling jackets printed with a new logo that blends Coach’s signature storypatch with Champion’s C-logo jock tag. “We’ve never allowed this before,” Munroe said of the reworked logo. 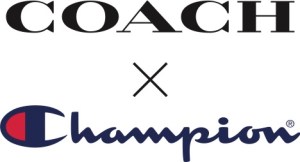 But Champion’s respect for Vevers’ design abilities allowed them to make an exception, Munroe said, adding that he admires the designer’s taste level and what he has done with the Coach brand to make it more modern and youthful.

Vevers said he enjoyed working with Coach’s statement materials such as leather and shearling and infusing them with Champion’s sporty elements such as jersey fabrics. He also said that “one of the most fun things to play with” was the “iconography” in both logos and combining them into a fresh, yet highly recognizable, new patch. “There’s something disruptive and bold about that,” he said.

The partnership also allows Champion to explore “more elevated product,” Vevers said. “Our styling came from a fashion point of view.” The collection will retail for $95 to $2,300.

The color palette is “very American,” Vevers said, and centers around red and blue along with “earthy colors” such as tan and black that help bring it more into a fashion sphere.

Munroe said he believes the collection will appeal to both the Coach customer as well as the Champion enthusiast seeking recognizable silhouettes such as sweatshirts and coach’s jackets but in elevated materials. “Every piece feels customized,” he said, pointing to a sweater dress with a leather short, shearling jackets, Super Fleece heavyweight hoodies and “amazing” crossbody bags. He was also impressed with Vevers’ interpretation of the classic Champion sweater. “We’ve never had a partner get it right,” Munroe said, adding that the collection as a whole “protects the guardrails of Champion but pushes us.”

Munroe said the overall collection offers a “comfortable luxe” aesthetic that feels “very youthful and relevant for today” and should appeal to the core Champion customer.

Vevers said the idea of these two houses coming together is “quite unexpected,” and he foresees a strong response to the collection. And if it’s successful, he hopes to continue working with Champion in the future. “I really enjoyed doing it.”